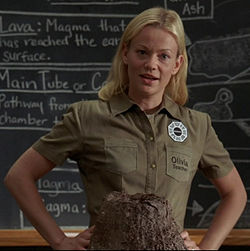 Olivia was a schoolteacher for the DHARMA Initiative on the Island in the mid-1970s. According to "Cabin Fever-Enhanced", she was Horace Goodspeed's wife, but this has been left unclear, since Horace was shown married to Amy sometime between 1974 and 1977. ("LaFleur") On the other hand, the Lost Encyclopedia refers to her only as a "good friend" of Horace.

Olivia was the passenger in Horace's car, on a road 32 miles outside of Portland, when they saw Roger Linus carrying his dying wife Emily and their newborn baby out of the woods. They pulled over to offer their assistance when Emily suddenly died. ("The Man Behind the Curtain")

Olivia and Horace were involved with the DHARMA Initiative. Olivia worked on the Island as an elementary school teacher, and Ben and Annie were two of her students. One of the lessons she taught the class involved a scientific demonstration using a papier-mâché volcano. When Annie questioned if the eruption of the fake volcano was similar to what happened to the real one on the Island, Olivia responded affirmatively, but calmed Annie's fear by stating it happened a "long time ago." ("The Man Behind the Curtain")

When the Hostiles attacked, Olivia reacted as though it were a common occurrence, and had a plan for how the students were to lock the doors and take cover. Olivia matter-of-factly picked up a bolt-action rifle, and showed proficiency in how she carried it. ("The Man Behind the Curtain")

Olivia spent 3 years on the island, then she left in unknown circumstances. (Mysteries of the Universe)

Olivia's reappearance was noticed by the producers of Mysteries of the Universe immediately, so they made a new episode based on her. In that episode, an employee from the documentary series called Olivia, and asked her whereabouts during the past 3 years. When Olivia learned who the call was from, she hung up the phone and refused to talk about the DHARMA Initiative. But a few days later, she sent a letter to the producer. In her letter, she explained that for the past 3 years she was doing research in the south pacific, and she no longer wished to be contacted regarding the matter. (Mysteries of the Universe)

After that, it's unknown what happened to her. But it can be assumed that she was still alive, and living in USA.

For fan theories about these unanswered questions, see: Olivia/Theories

Retrieved from "https://lostpedia.fandom.com/wiki/Olivia?oldid=1109171"
Community content is available under CC BY-NC-ND unless otherwise noted.