Start a Wiki
Of Mice and Men 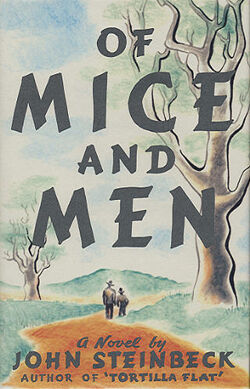 Of Mice and Men is a Depression-era novel written by John Steinbeck, centering around two friends trying to save up enough money to start their own ranch and no longer be under the thumb and employees. George, the more business minded, also watches over Lennie, whose slow wit tends to affect their grand plans.

The book is critical of the American Dream, and all dreams in general, suggesting that they are, quite often, ultimately futile.

Later on, Sawyer mentions the book, and Ben quotes a line about loneliness as he reveals to him that they are on Hydra Island. ("Every Man for Himself")

In the Lost Experience

Other Similarities and Shared Themes

Wikipedia has information related to:
Of Mice and Men
Retrieved from "https://lostpedia.fandom.com/wiki/Of_Mice_and_Men?oldid=1083265"
Community content is available under CC BY-NC-ND unless otherwise noted.