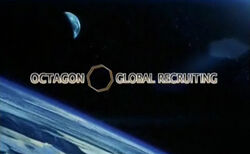 The television advertisement and site stated that Octagon Global Recruiting would hold a recruiting session in San Diego from July 24-27, 2008, and fan speculation relating to Comic-Con being at the same time and location was later confirmed in a series of emails, with the group supposedly running aptitude tests as part of their recruitment drive.

The advertisement asks for unpaid volunteers for a number of positions, listing the following (presented in order vertically):

A series of email newsletters were sent out by Hans Van Eeghen, Head of Recruiting for the Dharma Initiative. He advertised the recruitment drive at Comic-Con. The site source code also included an ominous message from a hacker known as RuckusGuy:

At the Octagon Global Recruiting booth, fans were given a waiver form and an appointment time by DHARMA staff (all with Australian accents). At their appropriate time, they entered the booth, which had cameras on the ceiling (these fed outside the booth so observers could see what was going on). With a set of headphones and television equipment, participants were shown images and given a series of questions, and had to say what first pops into their heads. Some of the images in particular were reportedly very bizarre. Questions were then asked such as "You just took away a child's favorite toy. Why?" Reportedly, fans had the option of what type of test they can take by choosing a different name. There were eight options, all names of Jupiter moons. One question example was, "Who is your constant?" which is an allusion to the episode "The Constant". [2]

The test apparently lasted about five minutes, and upon completion candidates were told whether they passed or not (it's likely everyone "passed" as part of the ARG). Participants were then told to make sure they see the Lost panel on Saturday, and have their test sheet with them (they apparently made a point of having your own sheet with you). They were also given an ID card, which includes special details which can, from July 28th, be entered on DharmaWantsYou.com to allow those who took the test to register for "Phase 2" of the application process.

The legal declaration form participants must sign finally revealed the name of the ARG project, Dharma Initiative Recruiting Project or simply known as "The Project".

At the Lost panel, Damon Lindelof and Carlton Cuse announced that DHARMA was sponsoring Lost. Hans Van Eeghen announced the results of the tests: nearly everyone had failed dismally except for a select few. These select few were going back to the DHARMA booth to be shown something "special". A little while later, a young guy called Dan Bronson with a video camera interrupted Damon and Carlton's presentation because he had gotten the secret video on tape and he thought that the fans deserved some answers. Despite security trying to take him away and Damon and Carlton's objections, Dan Bronson showed the video to Comic-Con.

The video hack RuckusGuy promised was released at Comic-Con, but visitors had some difficulty retrieving the file. To rectify this, a high quality version was later uploaded onto YouTube by "User:RuckusGuy".

For a transcript of the video, see DHARMA booth video.

After the events of Comic-Con, the DharmaWantsYou.com site officially launched, giving all fans a chance to join the Dharma Initiative. The site issued an eligibility test, followed by a string of aptitude tests spread out over a period of weeks.

Retrieved from "https://lostpedia.fandom.com/wiki/Octagon_Global_Recruiting?oldid=1001259"
Community content is available under CC BY-NC-ND unless otherwise noted.