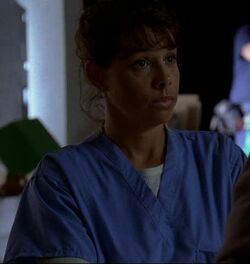 This Nurse worked at the Santa Rosa Mental Health Institute in which Hurley and Libby were institutionalized as patients. When Hurley came back (after being released) to visit Leonard, the nurse would not allow Hurley to see him, as he didn't know Leonard's last name. Eventually Hurley was let in by Dr. Curtis.

Retrieved from "https://lostpedia.fandom.com/wiki/Nurse_(Numbers)?oldid=1116203"
Community content is available under CC BY-NC-ND unless otherwise noted.