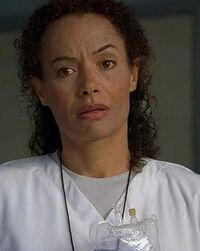 The nurse of "Meet Kevin Johnson" worked at the NY hospital where Michael was taken after his first attempted suicide.

The nurse came to check on Michael after his visions of Libby caused him to scream. The nurse attempted pleasant conversation with him. She explained that he was found badly hurt with no identification, only his letter to Walt. She asked if she should call Walt, and Michael shook his head.

Retrieved from "https://lostpedia.fandom.com/wiki/Nurse_(Meet_Kevin_Johnson)?oldid=1116206"
Community content is available under CC BY-NC-ND unless otherwise noted.