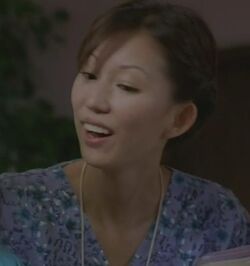 A nurse helped Sun when she was admitted to Choogdong Hospital to give birth. While she was taking Sun to Dr. Bae, she and the admitting nurse commented on Sun being one of the "Oceanic Six." ("Ji Yeon")

Retrieved from "https://lostpedia.fandom.com/wiki/Nurse_(Ji_Yeon)?oldid=1116201"
Community content is available under CC BY-NC-ND unless otherwise noted.