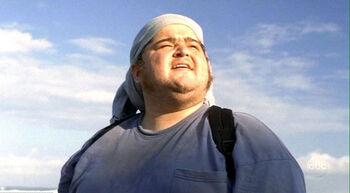 "Numbers" is the eighteenth episode of Season 1 of Lost. When Hurley sees the Numbers on Rousseau's maps and notes, he remembers them from his past, prompting him to head into the jungle after the French woman. Elsewhere, Locke asks for Claire's help in building something. Flashbacks in this episode feature Hurley's quest for the source of the cursed "Numbers" after winning the lottery with the numbers in question.

At his home, Hurley watches television. While arguing with his mom about his life, he discovers, to his astonishment, that he has won the lottery with the numbers 4, 8, 15, 16, 23, and 42. The next moment, Hurley faints. ♪

After winning, Hurley speaks to the press at his house. When asked how he thought of these six numbers, he claims the Numbers "sort of came to me." During the press conference, Hurley reveals he is going to give some of the money to his hard-working Grandpa Tito; but at that moment, the older man suffers a heart attack and dies. ♪

More bad luck befalls Hurley over the next several days. His brother's girlfriend leaves him for another lady, and at Tito's funeral, Father Aguillar was struck by lightning. He tells his mother he thinks the money is cursed, but his mom ignores him, saying they are Catholic and they do not believe in curses. Hurley buys his mom a new house, and when he takes her to see it, Carmen breaks her ankle and the new house is on fire. ♪ The next moment, the police show up and arrest Hurley, believing him to be a drug dealer.

Later, in his financial adviser Ken Halperin's office, he tells Hurley every one of his stocks are up, his interest in orange futures skyrocketed after tropical storms hit Florida, he is now majority shareholder of a box company in Tustin, and his sneaker company in Canada, which was destroyed in a fire where eight people died, was over-insured and will yield him a windfall of cash. Plus, Hurley got a financial settlement stemming from his false arrest by the LAPD. After hearing about more bad things happening associated with his lottery winnings, Hurley comes to the conclusion it is not the money that is cursed, but the numbers he used to win. As Ken is assuring Hurley there is no such thing as a curse, a man falls past the window behind him. ♪

Hurley visits the Santa Rosa Mental Health Institute, where he asks to see someone named Leonard. ♪ Leonard is a former U.S. Naval officer Hurley met while both were patients at the health institute. Leonard keeps repeating the numbers over and over, and when Hurley tells him he used these numbers to win the lottery, Leonard becomes hysterical, screaming Hurley had "opened the box" and he must get away from those numbers or it "won't stop." As the workers in the institute grab Leonard and drag him out of the room, he tells Hurley he heard the numbers from Sam Toomey, who had heard them in Kalgoorlie, Australia.

In Australia, Hurley is told by Toomey's wife, Martha, that Leonard and Sam Toomey had heard the Numbers "about 16 years ago" repeatedly through a looping radio broadcast while they were stationed at a listening post to monitor the Pacific. Just like Hurley, Sam used the Numbers, and met with similar bad luck. As a result, Sam likewise came to believe the Numbers were cursed, and eventually shot himself. Martha confidently says she believes the Numbers are not cursed. ♪

While building a new raft, Michael comes up with the idea to build a distress beacon. Jack and Hurley come to Sayid to ask for his help in building the beacon and in finding the way to Rousseau's camp so they can get a new battery. Sayid tries to discourage them, saying Rousseau is crazy and the maps he stole from her are useless. Hurley notices one of Rousseau's maps, where she had written the six numbers over and over again that changed Hurley's life.

Hurley wakes Sayid up in the middle of the night, asking him if he and Shannon figured out the meaning of the numbers Rousseau wrote. Sayid says he thought it might be coordinates of some kind. Hurley also asks him about the cable Sayid found, and wonders if her camp is close. When Sayid becomes suspicious, Hurley says goodnight and goes back to his tent.

In the caves, Hurley packs his backpack with water bottles. Charlie arrives, asking Hurley what is he doing, and Hurley claims he is going to find some new fishing areas. Charlie suggests he will join him, but Hurley says he could use some time alone. Suddenly the four water bottles fall from Hurley's bag, and as Charlie looks at him, Hurley says that he's a big guy and he gets dehydrated easily.

Back at camp, Locke enlists the help of Claire with a project he is working on. She says she will probably not be able to be of much help, as she is almost nine months pregnant, but Locke claims she is perfect for the job. Meanwhile, Sayid finds out that someone stole Rousseau's papers and confronts Jack, accusing him of making Hurley do his dirty work. Jack claims he does not know what Sayid is talking about, and asks Charlie if he saw Hurley. Charlie says he did, a couple of hours ago, and that he acted very weird. As Jack and Charlie prepare to leave, Sayid says goodbye to Shannon, who is worried about Sayid going. When Sayid asks her if she is worried about him, Shannon says, "So what if I am", Sayid tells her that he will be fine.

Hurley finds the cable and follows it until he steps on a pressure trigger to one of Rousseau's traps, just as Sayid, Jack, and Charlie catch up with him. If Hurley moves, a large trap with sharp sticks will be released. Hurley says, "I'm telling you I can make it! I'm spry!" The others try to talk him out of it. He makes his decision, and jumps. The trap misses him. When they ask him what he is doing, he claims he is going after Rousseau so he can get a battery. Sayid suggests that he will take the lead.

The search party reaches a rope bridge. After Hurley crosses it successfully, Charlie gives it a try. Along the way, the bridge breaks apart, but Charlie makes it across. Sayid and Jack are left on the other side. They tell Charlie and Hurley to stay where they are, but Hurley is determined to continue the search. Charlie shouts at him, saying they should listen to them, claiming Hurley is acting like "a bloody lunatic."

Back at camp, Michael and Jin have a tiff over the raft building, and Sawyer leaves in disgust. In the distance from Jin and Michael arguing are Sun and Kate sitting together on the beach. Sun tells Kate Jin won't ever speak to her again. Kate tells her he needs time, and Sun asks Kate if when the raft sails, if she thinks he will leave with them, Kate is unsure what to say. Elsewhere, Claire is still helping Locke build a mysterious object. The two discuss Claire's memory and Locke's special survival abilities. He also asks if she already has a name for her unborn child. Claire says she hadn't really thought about it, and reveals she was going to give it up for adoption. Claire also mentions it is her birthday. Locke then turns the completed object over, revealing it as a cradle for when the baby is born - a birthday gift.

Meanwhile, Jack and Sayid find Rousseau's camp. Jack accidentally hits a trip wire, and the whole camp explodes. They cannot find the batteries Rousseau had, and Sayid comes to the conclusion that she knew one day Sayid would come back, so she abandoned the camp and booby-trapped it to harm him.

Elsewhere in the jungle, Charlie demands that Hurley tells him why they are looking for the French woman, and he knows it has nothing to do with batteries. When Hurley is about to reveal his secret, they hear gunshots and start running. Hurley eventually comes face to face with Rousseau, holding a gun at him.

Hurley tells Rousseau he is from the same plane as Sayid, "that guy you tortured," was on. He shows her a piece of paper with the Numbers, and asks her why she wrote them, and if they have any meaning. Hurley gets angry, telling her that out of all the Island's mysteries, he wants some answers for the Numbers' appearance. She tells him her story - how she and the rest of her science expedition picked up a transmission with a voice repeating those numbers. After several weeks, they found a radio tower up by "the black rock." While they tried to figure out the meaning of the Numbers, all of the members became sick. So she returned to the radio tower and changed the Numbers transmission to the distress signal. Rousseau says that the Numbers were what brought her to the Island, like they brought Hurley. She says since the first time she heard them, only bad things happened to people she cared about. She agrees with Hurley's assertion that the Numbers may indeed be cursed. Hurley, who has waited a long time to hear someone agree with him, hugs her and thanks her. ♪ He catches up with Jack, Sayid and Charlie, and gives them a battery. He also delivers a message from Rousseau to Sayid: "She says hey."

Back at camp, Hurley confesses to Charlie he thinks the plane crashed because of him. He tells him that bad things happen to people around him, but Charlie interrupts him and says back on the plane, before it broke off in mid-air, he was snorting heroin in the toilet. He claims he could not even take a flight without taking drugs. "I suppose that was your fault, as well?" Hurley finally tells him that back home he's worth $156 million. Charlie believes Hurley is lying, and leaves Hurley, saying, "I bare my soul and all I get is bloody jokes."

On another part of the Island, the Hatch that Boone and Locke discovered, is shown in the jungle. The Numbers are embossed on it. ♪

This episode introduces the first statement of Hurley's theme.

Jack, Sayid, Charlie, and Hurley get a battery from Rousseau for the raft. (A-Missions)

Retrieved from "https://lostpedia.fandom.com/wiki/Numbers_(episode)?oldid=1022102"
Community content is available under CC BY-NC-ND unless otherwise noted.