Start a Wiki
"Not in Portland" 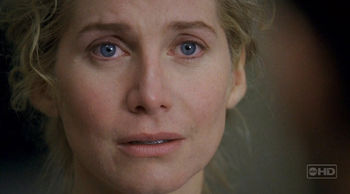 "Not in Portland" is the seventh episode in Season 3 of Lost, and the fifty-sixth produced hour of the series as a whole. It was the first episode to follow the season's opening "mini-season" and subsequent 13-week broadcasting hiatus. The broadcast of "Not in Portland" was preceded by a new recap episode titled "Lost Survivor Guide". While Jack is in command as the fate of Ben's life rests in his hands, Kate and Sawyer help Alex in return for a boat, and Juliet makes a shocking decision that could endanger her standing with her people. Flashbacks show how Juliet ends up on the Island through a meeting with Richard Alpert in order to care for her sister.

Juliet sits on a beach, crying, as the sun sets over the water. Heading inside a bleakly lit corridor, she passes Ethan, who says "hello." Inside a candlelit room, Juliet finds a woman sleeping. Using a zippered kit, she removes a syringe and fills it with a substance marked A4993-E3. The woman awakes, and Juliet discusses treating her, not because she is her doctor, but because she is her sister. She injects Rachel.

Juliet sneaks into the Miami Central University Medical Research Laboratory after hours. She gets a call from Diana, a secretary at Mittelos, regarding Dr. Burke's appointment to see Dr. Alpert the following day. Inside the lab room, Juliet pockets several bottles of the medicine she previously used on her sister and is interrupted by a man and woman entering the room, flirting and caressing each other. Juliet hides, but her cell phone rings, giving her away. The man moves over, and after Juliet makes up a story as to why she is there, he introduces Sherry to Juliet Burke, his ex-wife. He asks Juliet to leave, and smugly asks her to turn the lights off.

The next day at work, Juliet studies genetic data on her computer, but is interrupted by Sherry, who besides being involved with her ex is now a new research assistant. She asks Juliet to report to Dr. Edmund Burke immediately. In his office, Edmund reveals that he is fully aware of what she has been doing and suspects that the patient is her sister. He wants to collaborate as her findings could change the face of medical science, making both of them rich. He points out that the alternative is ethical and even legal scrutiny.

Juliet attends her meeting with Richard Alpert from Mittelos Bioscience. He presents a slide show about their facilities in Portland, Oregon, in the hope of recruiting her as a head of department. His pitch of independent funding and research freedom intrigues Juliet, who asks why they are interested in her. Alpert talks about Juliet's research, specifically the fact that she managed to impregnate a male field mouse; he is clearly impressed with her work. He asks her to examine a slide of a womb CT sequence. Juliet assesses that it is a human womb, and judging by the scan, most likely of a barren patient in her 70s. Alpert tells her that the woman is in fact just 26 years old, and that she could find out more if she worked with them. However, Juliet begins to cry, stating that her ex-husband would never let her go and short of his getting hit by a bus, she was bound to him. Apologizing, she leaves, adding that she is no leader.

Back at home, Juliet tells her sister about the interview and her confusion as her experiment is a failure, but is shocked to learn that she has not failed, as Rachel has discovered that she is is pregnant. Rachel has the box and instructions for a Widmore Home Pregnancy Kit on the table. With the resolve that all she must do now is get healthy again, Rachel and Juliet embrace, and talk about confronting Edmund. ♪

The next day Juliet finds Edmund talking to his mother rudely on his cell phone outside the lab. She tells him that Rachel is pregnant, but refuses to allow collaboration and testing on her own sibling. As Edmund argues, he steps out onto the street and is hit by a bus.

Juliet goes to the morgue to identify Edmund's body and sign paperwork. The doctor leaves her alone and she cries. She is interrupted by Richard Alpert and Ethan Rom. She half recognizes Ethan, and think aloud about her comment to Alpert about Edmund getting hit by a bus. Alpert says he doesn't recall, and that Juliet must still be in shock; she cannot blame herself for that "tragic accident." He knows about her sister's pregnancy because of their "very thorough recruitment process" and asks once more for Juliet to join their research, just for six months. Juliet asks whether she can bring her sister, but Alpert admits it may be difficult for her to get her treatment at such a remote facility, as it is in fact "not quite in Portland."

In the Hydra surgery room, Jack uses the walkie to tell Kate to leave the island with Sawyer and contact him when she's safe with the story he told her when they first met. Kate and Sawyer attack and knock out Pickett and Jason, and Sawyer smashes Pickett head against the food button. They lock the Others inside the cages and escape. In surgery, Juliet calls Jack's bluff and instructs Ivan to get Danny and recapture Austen and Ford, authorizing them to kill them if necessary. ♪♪ Juliet tells Jack that they can't escape because they are on a separate island. Jack is furious and tells Tom how Juliet had asked him to kill Ben. ("The Cost of Living") Though she denies it, Tom orders Juliet to leave the surgery.

While Ivan releases Danny and Jason, Kate and Sawyer make it to the beach and call Jack to ask for help in getting a boat. Danny and the two Others catch up, however, chasing them into the woods and destroying the walkie in the crossfire. ♪ Sawyer runs out of ammo and Kate is about to get shot by Jason when Alex shoots him with her slingshot and motions for Kate and Sawyer to follow her. She brings them to a hole covered by a camouflage hatch while their pursuers run past them.

Ben wakes and overhears Tom confronting Jack about Juliet's betrayal. Ben asks that Juliet be brought to him and Tom gets her.

Kate, Sawyer and Alex leave their hiding place. Alex says there is no tunnel to the main island but that she will take them to a boat if they help her rescue her boyfriend, Karl, who is being held prisoner somewhere on the island.

Ben congratulates Jack on his ploy and then asks to speak to Juliet alone. Jack and Tom watch from the observation room, but cannot hear what Ben and Juliet discuss. Tom says that Ben and Juliet "have history." Juliet comes out, tears in her eyes, and asks Jack to finish the surgery. In return, she will help his friends escape.

Juliet then goes to the video surveillance room and sees Kate and Sawyer on one of the many monitors. She zooms in to find out that they are with Alex. ♪

Alex brings Sawyer and Kate to another part of the Hydra compound in the jungle. An Other, Aldo, is sitting guard outside, reading Stephen Hawking's A Brief History of Time, and Alex approaches, claiming to have captured Kate and Sawyer. As they argue about "her dad" not wanting her to be there, Sawyer knocks him over and mocks him for falling for the "ol' Wookie prisoner gag."

Kate threatens to shoot Aldo in the knee (she tells Sawyer later that she wasn't bluffing), so he reveals that Karl is at the end of the hall in Room 23. Kate knocks him out and they break into the room, where Karl is strapped to a chair with an IV in his arm and LED glasses on his face. He is being forced to watch a video with strange flashing images, text, and sounds. Sawyer is momentarily entranced by the video, but Kate snaps him out of it. They remove Karl from his chair, and Sawyer carries him out over his shoulder.

Danny and company find Aldo, just as Juliet catches up with them after monitoring Kate and Sawyer's location from the Hydra video feeds. She tells Danny about her new orders to let them leave, but Danny counters that Ben would rather die than let them go.

Jack continues the surgery. He asks Tom why they didn't take Ben off the island for surgery. Tom starts to say something about when the "sky turned purple ..." but is interrupted when Jack accidentally snags an artery.

The fugitives load Karl onto Alex's small canoe. Sawyer comments on Alex being the "boss' daughter," and she confirms this. Danny arrives and is about to kill Sawyer when Juliet appears and kills him, shooting him several times in the chest. Juliet tells them to leave on the boat, but that Alex must stay behind because that's the only way Ben will let Karl live. Alex agrees, saying goodbye to Karl. Juliet gives Kate her walkie-talkie.

The surgery is interrupted by Kate on the walkie-talkie informing Jack that they have a boat and are being let go by Juliet. ♪ Jack makes her tell him the story he told her when they first met. Kate tears up as she recounts how he conquered his fear when one of his early surgery patients was in jeopardy, by counting to five. The story focuses Jack and he is able to stabilize Ben. He makes Kate promise never to come back for him, and Sawyer, Kate, and Karl reluctantly sail away in the canoe as Alex and Juliet watch on. ♪♪

Juliet returns to the station, and meets Jack in the observation room. He asks what will happen now that he has removed the tumor for Ben, and Juliet says he'll go back to his cell until they figure out what to do with him. Jack demands to know what Ben said to make Juliet want to save his life, that after all they have put him through he deserves that. Juliet sadly tells Jack that she has been on the island for three years, two months, and twenty-eight days, and that Ben told her if she co-operated and he lived, he would finally let her go home. Juliet becomes emotional and leaves the room.

The Season 3 soundtrack includes two cues from this episode. "Teaser Time" contains the first soundtrack statement of the Others' mystery theme. "Here Today, Gone to Maui" combines several themes, including the life and death theme.

Retrieved from "https://lostpedia.fandom.com/wiki/Not_in_Portland?oldid=1113908"
Community content is available under CC BY-NC-ND unless otherwise noted.