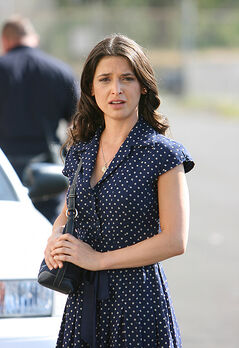 This article is about Sayid's wife. For Mikhail's cat named Nadia, see cats.

Noor Abed Jaseem, more commonly known as "Nadia", was Sayid's childhood friend and long-lost love. She was reunited with Sayid when he returned from the Island, and married him; however, she was killed in a hit-and-run soon afterwards, a fact used by Ben Linus to manipulate Sayid into working for him as an assassin.

During her funeral, the coffin appeared to show her name in Arabic as Noor Shamar.

Before rescue of Oceanic Six

Nadia met Sayid at a young age, tormenting him in the schoolyard because he wouldn't give her attention. Despite coming from a wealthy and powerful family, she later chose to join an insurgent group against Saddam Hussein's regime, which caused her to become the subject of repeated captures and interrogations by the Iraqi Republican Guard.

When Sayid was promoted to the Intelligence Division, he was reunited with Nadia while she was imprisoned. He was tasked with her interrogation, which he attempted to carry out, but they reconnected more and more throughout her captivity. Sayid even tried to help get her charges dropped. Ultimately, when his superior officer, Omar, ordered her execution, Sayid resolved to instead help her escape. During the attempt, Sayid had to shoot Omar, who had caught up with him and Nadia. Additionally, as a cover story, Sayid shot himself in the leg and let Nadia escape with his gun. Before escaping, a panicked Nadia begged Sayid to come with her. When he refused, she left him her photo with the Arabic inscription, "You will see me in the next life, if not in this one." While being interrogated on the Island by Danielle, Sayid claimed that Nadia was dead and it was his fault. ("Solitary")

However, Nadia's escape was successful, and at some point, Nadia was in England, where Charlie spotted her being mugged in an alleyway near Covent Garden. After Charlie confronted the mugger and drove him away by bashing him with his guitar case, Nadia thanked Charlie and called him a hero, telling him that several other people had noticed the attack without taking any action. Charlie later regarded this as one of the best moments of his life, though he never knew he'd met the woman Sayid loved. ("Greatest Hits")

Within a few years after her escape, she fled to Los Angeles. At one point, John Locke was hired to inspect a house she was buying. Through the few words they exchanged, she revealed that she was not married. ("Lockdown")

Her whereabouts were later used as a lure by the CIA to get Sayid to work for them. Eventually, they informed Sayid that Nadia was working in Irvine, California as "a lab tech in a medical testing company." ("The Greater Good")

After rescue of Oceanic Six

Once Sayid escaped from the Island as one of the Oceanic Six, Nadia finally found him again after the group's first press conference. They tearfully embraced, overjoyed to see each other again. Sayid and Nadia later married. At some point before or after the wedding, she befriended the other members of the Oceanic Six, attending Hurley's surprise party and Christian Shephard's funeral service. ("There's No Place Like Home, Part 1")

Their marriage came to an abrupt and tragic end, however, when she was killed in Los Angeles in late October 2005. She was hit by a car in a hit-and-run collision while Sayid was occupied with giving directions to a stranger. Her last words to Sayid before she died were, "Take me home." ("The Incident, Part 1")

Sayid was a pallbearer at Nadia's funeral in Tikrit, Iraq, five days later. ("The Shape of Things to Come") Meeting Sayid at her funeral, Ben presented circumstantial evidence (a picture from a traffic camera) that identified Ishmael Bakir, an employee of Charles Widmore, as the killer. Believing Ben's story, Sayid followed and later killed Bakir in a fit of rage. Sayid, still bent on revenge for Nadia's death, came to work for Ben — tracking down other employees of Charles Widmore and assassinating them. ("The Shape of Things to Come")  ("The Economist")

After his experiences in the Iraqi Republican Guard, Sayid encouraged Nadia to marry his brother Omer, although he was still in love with her himself. She was mother to Eva and Sam. ("Sundown")

Retrieved from "https://lostpedia.fandom.com/wiki/Noor_%22Nadia%22_Abed_Jaseem?oldid=1113847"
Community content is available under CC BY-NC-ND unless otherwise noted.