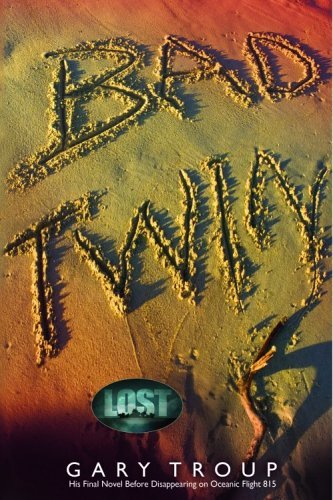 Bad Twin was created in the LOST 'universe', then released as a real life tie-in novel. It is available in hardcover and audiobook.

Bad Twin was written by (fictional author) Gary Troup, who delivered the manuscript to Hyperion Publishing just before his fateful trip on Oceanic Flight 815. It is unknown if the author survived the crash, but the manuscript was found and read by Hurley (in Episode 2x13—The Long Con). The manuscript was later acquired by Sawyer. Before Sawyer could finish reading it, Jack burned the ending to emphasise his serious demand that Sawyer hand over the stolen guns (Episode 2x20—Two for the Road).

The main character of Bad Twin is Paul Artisan. The book centers around Artisan's search for Clifford Widmore's 'mirror' twin, Alexander (the supposed Bad Twin) who has a personality similar to Sawyer's.

The note from the editors indicated that the author was lost when Oceanic Flight 815 crashed in September 2004. However, page 204 of the book details the main character learning of the ceasation of Scottish feudalism on 28 November 2004 (the factual, real-world date).

This anachronism indicates author knowledge of events that occured after penmanship, after delivery of the manuscript to the publisher, and after the date of the crash.

Sometimes evil has a familiar face . . .

Paul Artisan, P.I. is a new version of an old breed -- a righter of wrongs, someone driven to get to the bottom of things. Too bad his usual cases are of the boring malpractice and fraud variety. Until now.

His new gig turns on the disappearance of one of a pair of twins, adult scions of a rich but tragedy-prone family. The missing twin -- a charismatic poster-boy for irresponsibility -- has spent his life daring people to hate him, punishing himself endlessly for his screw-ups and misdeeds. The other twin -- Artisan's client -- is dutiful and resentful in equal measure, bewildered that his "other half" could have turned out so badly, and wracked by guilt at his inability to reform him. He has a more practical reason, as well, for wanting his brother found: their crazy father, in failing health and with guilty secrets of his own, will not divide the family fortune until both siblings are accounted for.

But it isn't just a fortune that's at stake here. Truth itself is up for grabs, as the detective's discoveries seem to challenge everything we think we know about identity, and human nature, and family. As Artisan journeys across the globe to track down the bad twin, he seems to have moved into a mirror-world where friends and enemies have a way of looking very much alike. The P.I. may have his long-awaited chance to put his courage and ideals to the test, but if he doesn't get to the bottom of this case soon, it could very well cost him his life.

Troup's long-awaited Bad Twin is a suspenseful novel that touches on many powerful themes, including the consequence of vengeance, the power of redemption, and where to turn when all seems lost.

An excerpt from the audiobook version can be found at the www.Soundsgood.com Bad Twin product details page. [1]

The book is listed as fiction, while mentioning 'real' corporations and people (related to LOST).

Connections to The Lost Experience

See an interview on the author's page, and see also the Hanso Foundation advertisement and press releases related to Bad Twin

Thehansofoundation.org updated its site with an entry dated Fri 12/05/06 (May 12, 2006) entitled: "Don't Believe Bad Twin". The entry is linked to a press release gif image, whose contents are below:

A photocopied image with an identical message appears on letyourcompassguideyou.com. [2]

Theories and other Thoughts

Retrieved from "https://lostpedia.fandom.com/wiki/Bad_Twin?oldid=34118"
Community content is available under CC BY-NC-ND unless otherwise noted.