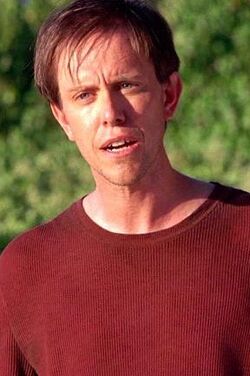 Neil, sometimes referred to as "Frogurt", due to his profession as a frozen yogurt salesman, was one of the middle section survivors of Oceanic Flight 815. Neil survived on the Island for 101 days, dying after receiving a flaming arrow to the chest during the island's time shifting period.

In the flash-sideways, Neil was just as temperamental as he was before. It's unknown when or if he remembered his life and moved on.

Not much is known about Neil before he came to the Island. It is assumed that he used to make frozen yogurt, as indicated by Bernard. He also has a family history of asthma. ("S.O.S.")

Neil was mentioned as being among the volunteers who tried to help Bernard build the S.O.S sign. He soon lost interest however, and abandoned him. ("S.O.S.") Neil had an infatuation with Libby, one of the tail section survivors. He threatened Hurley that he was going to take her away from him, but backed down when he learned of Hurley's date with her. ("The Adventures of Hurley and Frogurt")

Neil joined Jack's group due to his dislike of Hurley, who was in Locke's group. (Official Lost Podcast/April 19, 2008) Neil was on Daniel Faraday's second trip to the Kahana. The zodiac raft did not reach its destination, as the freighter was destroyed beforehand. Neil and the rest of his companions on the raft were moved along with the Island.

After the Island moved, Neil, on the Zodiac raft with Daniel Faraday, returned to the island to reunite with his fellow survivors as they tried to find out what happened. ("Because You Left") Soon afterward, Neil got into a heated argument with several of his survivors over making fire, which he claimed was futile. As time passed, tensions escalated and Neil began to personally insult his fellow survivors, calling Sawyer "inbred" and criticizing Bernard's inability to make fire. As he said this, he was struck by a flaming arrow shot by the Others in 1954, which launched the fire arrow attack. Neil stumbled around for several moments, screaming in agony before being felled by another volley of arrows. ("The Lie")

In the flash sideways, Neil was seated next to Locke and Boone on Flight 815. He slept with an eye mask on. ("LA X, Part 1")

After getting off the plane, outside LAX, he made a snide comment to Kate that there was a line to queue in for the taxi cab line. ("LA X, Part 2")

Retrieved from "https://lostpedia.fandom.com/wiki/Neil_%22Frogurt%22?oldid=1116447"
Community content is available under CC BY-NC-ND unless otherwise noted.