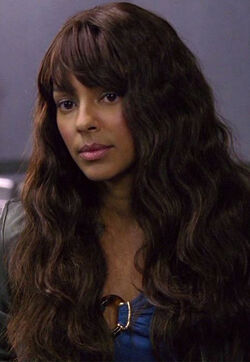 Naomi Dorrit was a mercenary assigned by Charles Widmore to protect the freighter's science team. She arrived on the Island by parachute. She landed in a tree in the jungle, was cut down by Desmond and Charlie, and was found to have a punctured lung that was treated by Mikhail. ("Catch-22")  ("D.O.C.") Naomi survived on the Island for seven days, assisting the survivors in contacting her freighter, before being fatally knifed in the back by Locke. ("Through the Looking Glass, Part 2")  ("The Beginning of the End")

There is very little information about Naomi's past, but she states that she's from Manchester, England. ("Meet Kevin Johnson") She is multilingual and can speak English, Mandarin Chinese, Spanish, Italian, and Portuguese. Her conversation with Matthew Abaddon prior to her mission to the Island also suggests that she is a skilled operative with military experience, and suited for dangerous black ops scenarios.

Before arriving on the Island, Naomi was hired by Matthew Abaddon for a special operation. She was to lead and protect a team of civilians (Daniel, Miles, Charlotte, and Frank); but she doubted that she could, as none had experience in the field or with the type of mission they would be undertaking. Her mission would take her to the Island, and Naomi commented that she believed on the Island there might be survivors of Oceanic Flight 815. Abaddon sternly reassured her that there were no survivors, and reiterated his confidence that Naomi was very well-trained for the mission and encouraged her to take it. She agreed. ("Confirmed Dead")

Not long after, Naomi approached Miles, with the intention of recruiting him to the Science team, for the special operation. She explained that her employer had been following his work, and that his services were needed for their mission. Once she had Miles's interest, Naomi took him for an "audition" to a vacant restaurant, where a corpse was being kept. She asked Miles to tell her about the corpse, and after communicating with it, Miles told her that the corpse's name was Felix, and that he had been delivering papers and photos to Widmore when he died. Naomi then offered him 1.6 million dollars to come on the expedition, to which Miles agreed. ("Some Like It Hoth")

Naomi did not really interact with her team members before the mission. Frank described her as "senior management" and implied that they never had much contact, and Miles also stated that he didn't know her very well. ("The Economist")

Naomi met Michael for the first time as he was boarding the Kahana at the Port of Suva, Fiji. They joked about their accents and she informed him that a package had arrived for him and it would be delivered to his quarters. While the ship was underway, Michael witnessed Naomi and Frank arguing over who would pilot a chopper first. Frank insisted he should, as he was the better-trained pilot on board, but Naomi insisted she go first, telling Frank he would be needed to transport the science team. When Frank asked her what she would be doing, she told him that that information was privileged. ("Meet Kevin Johnson")

Naomi landed on the Island after ejecting from a helicopter, and her parachute snagged on some trees. She was carrying a backpack when she jumped which contained a satellite phone and a copy of the novel Catch-22 (Ardil-22, a Brazilian Portuguese edition), which contained a photograph of Desmond and Penny (among other things such as a packet of beef stew, a nutra fruit bar and the hula doll). A flare gun was later discovered. Before her face was revealed, the photograph (and his flashes) led Desmond to believe that she was actually Penny. Naomi was cut down out of the trees by Desmond, and caught by Jin, Charlie and Hurley. She recognized Desmond and spoke his name when she saw him after her visor was removed. ("Catch-22")

When she evacuated the helicopter, she was wearing an oxygen mask, a tinted visor, and was equipped with an emergency beacon.

During her emergency landing, Naomi suffered a haemothorax, when a tree branch punctured her lung. She asked "??????" ("What happened?") in Mandarin (Chinese), and then said she was dying in Spanish and Italian as Desmond attended to her. Mikhail, who suddenly appeared and then was captured by Jin and Desmond, revealed that he was a Soviet Army field medic and offered to save her in exchange for his release. He placed an improvised chest tube in her to drain the blood from her lung and re-inflate it, then packed the wound. Still dazed, she spoke to Mikhail in a foreign language, and Mikhail lied and claimed she had thanked him for saving her, even though her actual words were "eu não estou só" which is Portuguese for "I am not alone."

After waking up, she asked Hurley where she was (in English, with a Mancunian English accent). Hurley informed her that she was on an island with survivors from Oceanic Flight 815. She replied that wasn't possible, as the plane had been found with no survivors. ("D.O.C.")

Naomi tells Sayid that her search and rescue team was hired by Penelope Widmore (although she claimed had never met Penny herself) to search for Desmond. Naomi also tells Sayid that flight 815 was found in a 4 mile deep ocean trench off the coast of Bali. She also says that cameras and robots were used to survey the wreck and found all the bodies. From what Kate tells Jack, Naomi's ship is 80 nautical miles away from the Island, and, using the satellite phone, she hopes to contact the ship and get them rescued. ("The Brig")

The next day, everyone on the beach was in an uproar about Naomi's revelations that the world thought that they were dead. Naomi told everyone about the satellite phone and told them that it's not important that everyone thinks they are dead, but that they will be rescued. ("The Man Behind the Curtain")

Later, Naomi asks Charlie who the rival group on the Island are. They begin a conversation and it is revealed that like Charlie, Naomi is from Manchester. Charlie tells her that his band got his band started there and Naomi realizes that Charlie is that "dead rock star" everyone made a big deal about when they found the wreckage of Oceanic Flight 815. She tells him that they had a big memorial service and that his band Drive Shaft released a new "Greatest Hits" album in memory of him, which sold well. ("Greatest Hits")

On the 91st day Jack, Rousseau and Naomi led most of the Losties toward the radio tower, so they could shut off Rousseau's 16-year-old repeating transmission and clear the frequency to allow Naomi to contact her ship now that Charlie had shutdown the jamming system in the Looking Glass. On their trek, they were met by Ben and Alex, and Ben attempted to dissuade Jack from contacting Naomi's crew. Ben made a point of approaching Naomi and introducing himself before Jack told her not to talk to him. Ben asserted to Jack that Naomi is not "who she says she is," that she was "one of the bad guys," and that contacting her ship would not bring rescue, but rather would end the lives of everyone on the Island. Ignoring and later attacking Ben, Jack led his group to the tower, and shut off Danielle's transmission. Naomi had just made the call to her freighter, when she suddenly fell over with a knife in her back, thrown by Locke. ("Through the Looking Glass")

Locke's knife attack failed to immediately kill Naomi. She managed to get up and escape into the jungle, when no one but Ben was looking. Thinking that the survivors were out to kill her, she managed to create a dummy-trail using her own blood, to confuse anyone who may come looking for her. Jack and Danielle (along with Ben) did come looking for her, and were misled by her fake trail, but Kate, who also went searching for her, followed the correct trail.

Naomi, hiding in a tree, ambushed Kate and then held her at knife-point. She asked why the survivors had tried to kill her when all she was doing was trying to save them. Kate convinced her that it wasn't they who attacked her, it was Locke, who thought that she wasn't who she said she was. Seemingly convinced, Naomi took the satellite phone, readjusted the weak signal, giving Minkowski a better idea of where their location was, then told him that she had sustained a serious injury (referencing the injury she had received, but had recovered from, when landing on the island a few days ago). She then asked Minkowski to tell her sister that she loves her, just before succumbing to her injuries and dying. ("The Beginning of the End").

Miles later revealed that the message about a sister was a pre-arranged code-phrase, meaning the information communicated was done so under duress, and Naomi, in fact, had no sister. Kate led Miles and Daniel Faraday to Naomi's body, where Miles examined her, and appeared to enter a meditative séance. When he finished, Miles concurred Locke was responsible for her death. Kate and Daniel carried her body to the helicopter, against Miles's wishes, who said it was just "meat." The helicopter was too low on fuel to carry her, so her body was to be left behind until the helicopter could refuel on the freighter. ("Confirmed Dead")

A while later, Sayid respectfully closed Naomi's eyes and pulled a blanket over her body. While doing so, he noticed she wore a bracelet inscribed with the message, "N, I'll always be with you. R.G." Later, the same day, the helicopter took off for the freighter. Noting a vacancy on the helicopter, Sayid suggested Naomi should be taken "home," and her body was placed on the helicopter and flown back to the Kahana. ("The Economist") Naomi's body was aboard the Kahana when it was destroyed by a bomb and sunk. It's unknown if her body remained in one piece after the explosion. ("There's No Place Like Home, Part 2")

Later Naomi was revealed to be a candidate. On the lighthouse dial "Dorrit" is listed as Number 27. ("Lighthouse")

Naomi was not seen in the flash sideways. Of Widmore's crew only Miles Straume, Daniel Faraday, Charlotte Lewis, George Minkowski, Omar and Martin Keamy were seen.

For fan theories about these unanswered questions, see: Naomi Dorrit/Theories

Retrieved from "https://lostpedia.fandom.com/wiki/Naomi_Dorrit?oldid=1115072"
Community content is available under CC BY-NC-ND unless otherwise noted.