This article is about the episode. For the salutation, see Namaste. 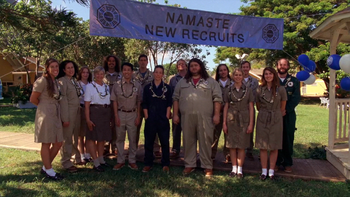 "Namaste" is the ninth episode of Season 5 of Lost and the ninety-fifth produced hour of the series as a whole. It was originally broadcast on March 18, 2009. The return of his old friends to the Island makes it harder for Sawyer to keep his lie concealed, and Sun and Frank vacate Hydra Island to find Jin.

Jack, Kate, and Hurley greet Sawyer with excitement and hugs. ♪ When Hurley asks why they're wearing DHARMA jumpsuits, Sawyer tells them that they are in 1977. Miles calls Jin on the walkie, asking where he is. Jin warns Sawyer that if he doesn’t report in soon a search party will be sent out and asks what they should do with the new arrivals. When Jack reveals that more of their fellow survivors, including Sun were on the same plane, Jin immediately heads to the Flame saying Radzinsky would know if a plane had landed.

Back at the Barracks, Juliet asks Miles where Sawyer is. Looking on monitors in the security station, Miles sees Sawyer returning to his home. There, as Sawyer is gathering clothing to disguise the new arrivals, Juliet enters and asks him what is going on. He informs her that Jack, Kate, and Hurley have returned and he is trying to figure a way to sneak them into the Barracks. Juliet then tells him that a submarine is scheduled to arrive that day.

At the Flame, Radzinsky is building a model of the Swan’s geodesic dome. Jin bursts in and begins checking instruments. Radzinsky warns Jin away, saying that only he is allowed to use these instruments. When Jin asks about a possible plane crash, Radzinsky expresses skepticism and refuses to help. However, when Jin physically threatens him, Radzinsky puts out a call to the other DHARMA stations to report in any sightings of a plane.

Juliet then retrieves the submarine manifest from Amy who is relaxing with her new baby. Amy mentions that two of the new recruits had dropped out at the last minute. Juliet inquires about the name of the baby, and Amy reveals that she and Horace plan to name their new baby Ethan. ♪

Afterwards Amy asks when Juliet and Jim (Sawyer) are going to have a child; Juliet replies "I don't know. Timing's gotta be right." ♪

At the Flame, Radzinsky informs Jin that he heard from the Looking Glass, the last station to report in, with no sighting of a plane. He tells Jin to go home, but before they can do anything an alarm sounds, indicating that a motion sensor has detected a Hostile within their perimeter. Jin races outside and into the tall grass surrounding the Flame. He sees someone moving and calls to them to stop. Getting closer he sees that it is Sayid. They greet each other happily and Jin asks about Sun’s whereabouts. All Sayid has time to do is tell Jin that he doesn’t know where Sun is before Radzinsky shows up. Jin is forced to pretend that Sayid is a Hostile and forces him to kneel at gunpoint, warning him that he will be killed if he says another word.

Sawyer drives Jack, Kate, and Hurley to the Processing Center. Along the way, Sawyer mentions that Daniel Faraday has told him certain theories on what actions are possible (or impossible) after having traveled through time; but also notes that Faraday is not there anymore.

Upon arrival at the Processing Center, Sawyer prepares the group for their induction into the DHARMA Initiative. ♪ Miles arrives and reports to Sawyer that Jin has a problem at the Flame. Calling Jin on the walkie, Sawyer discovers that Sayid has been captured and that Radzinsky is “taking care of it.”

At the Processing Center, Jack is being inducted by Pierre Chang. After asking him a few questions he gives Jack his new assignment, as a workman performing janitorial duties. Kate is questioned by Phil, who becomes suspicious when her name does not appear on the recruits list. Before he grows any more suspicious, Juliet appears with a new list which she claims to have gotten from Amy and which contains Kate’s information.

Meanwhile, at the Flame, Sawyer arrives to collect Sayid but discovers that Radzinsky is very suspicious of Sayid, who he believes might have seen the plans for the Swan. Sawyer collects Sayid, and takes him to the Barracks.

As the new recruits pose for a group photograph, Sawyer interrupts the ceremony, bringing a captive Sayid to the Barracks. Sawyer and Radzinsky usher Sayid into an underground holding cell.

That night, Jack goes to see Sawyer and is surprised to find Juliet at his house. ♪ After a heartfelt greeting, she shows him inside where Sawyer is sitting and reading a book. Jack asks him about Sayid, and Sawyer informs him that he’s thinking of a way to save him. After Jack complains that Sawyer had merely been reading, Sawyer responds that Jack "just reacted" as leader, instead of thinking things through and blames Jack for the deaths which had occurred under his leadership. ♪ Sawyer asserts that he is now the leader and sees Jack out. As Jack walks away, Sawyer exchanges a glance with Kate, who is standing on the porch of a nearby house. ♪

At the holding cell, a polite young boy delivers a sandwich to Sayid. The boy asks Sayid if he is a Hostile to which Sayid replies, "Do you think I am?" The two exchange names and the young boy introduces himself as Ben, which shocks Sayid.

Just before the crash of Ajira Airways Flight 316, the Oceanic Six contemplate their fate. ♪ In the cabin, the co-pilot tells Frank Lapidus that he recognized Hurley as one of the Oceanic Six, and marvels at Hurley's willingness to fly over the South Pacific again. Shortly afterward, the plane encounters heavy turbulence in the night sky. Frank takes manual control and attempts to correct the course of the plane. There’s a flash of light, and suddenly they find themselves flying above clouds in daylight. ♪

The plane begins giving them a stall warning. Frank tries to get the plane under control, but as they emerge from the clouds the mountains of the Hydra Island loom in front of them. Fighting for control of the plane, Frank manages to miss hitting a hill. When the radio is turned on, a broadcast of the numbers is heard. As Frank flies over the Island, the copilot sees what looks like a runway. Frank flies toward it and lands, but cannot stop the plane before the end of the runway. He blacks out, and upon awakening discovers his co-pilot has been killed, impaled by a tree branch. ♪

In the plane's cabin, Caesar checks on Ilana, who has passed out. He wakes her and apprises her of the crash. After noting that Sayid is gone, she gets up with Caesar’s help. Frank then emerges from the cockpit to check on the passengers. Sun calls to him and he goes to help her, asking where the other Oceanic Six members are. Ben suddenly appears and states that "they are gone."

As Sun is staring out to sea, Ilana approaches and inquires if she lost someone in the plane crash. ♪ Sun replies that she was traveling alone. Frank then calls everyone together and informs them that his radio is not working, but that their best plan is to simply wait for rescue. At this point, Caesar asks where they are and expresses skepticism at Frank's claim that the Island is not on the maps. Caesar notes that there are buildings nearby and another Island visible across the water. On hearing this, Ben, who had been sitting near by, takes off into the jungle. Sun follows him, and when she catches him, Ben explains that he’s heading back to the main Island and invites Sun to come with him. ♪

Ben then admits to Sun that he doesn’t know where Jin is, but that the main Island is the logical place to start looking. He convinces Sun to come with him. At this point Frank emerges from the Jungle and warns Sun not to trust Ben. She argues that she has to, and the two of them follow Ben to where a trio of outriggers have been hidden. As Ben talks to Frank, Sun sneaks up behind him and knocks him out with a boat oar.

Frank and Sun arrive at the dock at night. Walking along the dock, they see debris scattered about and hear rustling in the bushes as they approach the Barracks from the submarine dock. Frank asked what made the noises, and Sun said it was probably an animal. Arriving at the Processing Center, they find the place disheveled and apparently deserted. The two hear the whispers, then a light goes on inside a building next to the Processing Center. A door opens and a silhouetted figure greets them. He identifies himself as Christian, and when Sun asks about her husband, he tells them to follow him. Heading into the center, Christian locates a picture from 1977 on the wall. When he shows it to Frank and Sun, they see their friends in a recruiting photo from the DHARMA Initiative. Christian says "I'm sorry, but you have a bit of a journey ahead of you."

The Season 5 soundtrack includes the track "Crash and Yearn" from this episode.

For fan theories about these unanswered questions, see: Namaste/Theories

Retrieved from "https://lostpedia.fandom.com/wiki/Namaste?oldid=1115519"
Community content is available under CC BY-NC-ND unless otherwise noted.