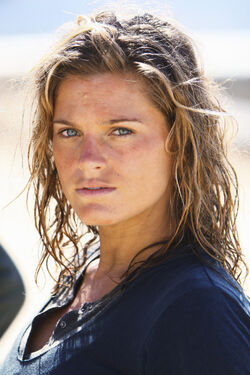 Nadine was one of the members of the science expedition that arrived on the Island on a life raft in a storm in 1988.

Nadine arrived on the Island with the rest of her science expedition team in November 1988. After their ship was destroyed in a storm, they and Jin arrived on shore in a life raft. ("The Little Prince")

While hiking through the jungle to a radio tower with a time-traveling Jin and the rest of the science expedition, Nadine suddenly went missing, leading to a frantic search of the jungle by her comrades. Her beaten and bloodied body was discovered after it dropped from the canopy above. The team had ventured into what Danielle would dub the Dark Territory, while Nadine had become a victim of the Monster. ("This Place Is Death")

Retrieved from "https://lostpedia.fandom.com/wiki/Nadine?oldid=1109364"
Community content is available under CC BY-NC-ND unless otherwise noted.