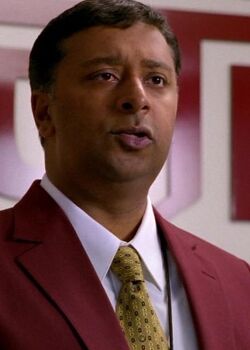 Nabil is a ticket agent for Ajira Airlines at Los Angeles International Airport.

Jack Shephard, after arriving at the airport to unite with the other survivors, bought his ticket from Nabil. Nabil then questioned him about the corpse that Jack was bringing along with him on the flight, asking who was receiving the body and what Jack's relationship to the deceased was. He then informed Jack of a routine check that would be performed on the casket, to which Jack consented. ("316")

In the casting call, Nabil was named "Nandi", and described as "Male, 30-35, Indian (South Asian) he's smart and professional. He's used to working with difficult and annoying people, so he's developed a kind but firm demeanor." [1]

Retrieved from "https://lostpedia.fandom.com/wiki/Nabil?oldid=1115677"
Community content is available under CC BY-NC-ND unless otherwise noted.