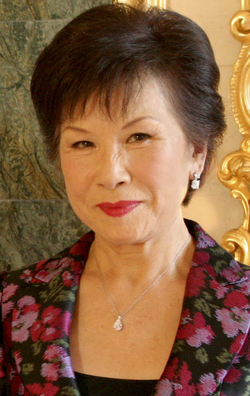 Mrs. Paik is Sun's mother, and Woo-Jung Paik's wife. Upon returning from Seoul National University, Mr. Paik decided that it was time for his daughter, Sun to get married, and pressed Mrs. Paik into action. She met Jae Lee; and after determining that he was acceptable, she left Sun and Jae Lee to get to know each other. ("...And Found")

Sun told Claire in "Par Avion" that her mother never worked a day in her life and that her mother's greatest fear probably would be that Sun marry the son of a fisherman.

After Sun returned as one of the Oceanic Six, her mother and father were awaiting her return, and hugged her. ("There's No Place Like Home, Part 1") She looked after her granddaughter, Ji Yeon while Sun was on company business in London, meeting with Charles Widmore. ("There's No Place Like Home, Part 2") Mrs. Paik also took care of Ji Yeon while Sun was in Los Angeles visiting Kate. It is likely that she and Mr. Paik became the child's guardians after Ajira Flight 316 was declared lost and the passengers aboard, including Sun, dead. ("This Place Is Death")

Retrieved from "https://lostpedia.fandom.com/wiki/Mrs._Paik?oldid=1104220"
Community content is available under CC BY-NC-ND unless otherwise noted.