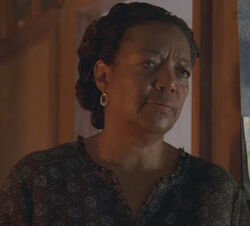 Mrs. Gardner was a character in "Confirmed Dead" portrayed by Azure McCall. Her grandson had been murdered, and she hired Miles Straume to exorcise her grandson's ghost from her Inglewood, California home.

Miles, possibly acting out of guilt, gave $100 of her money back after stealing hundreds from the grandson's room, saying the job "wasn't as tricky as I thought". He told her that her grandson's soul was "at peace" before leaving, and she hugged him, thanking him.

Retrieved from "https://lostpedia.fandom.com/wiki/Mrs._Gardner?oldid=1082596"
Community content is available under CC BY-NC-ND unless otherwise noted.