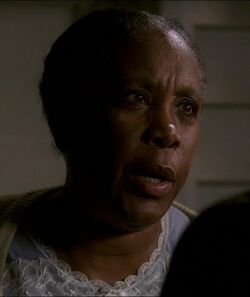 Before Michael boarded Oceanic Flight 815, he called his mother and expressed his feelings about being a father, and told his mother that he lived in a studio apartment and that he left for work early in the morning each day. He asked his mother if she could take care of Walt. His mother declined, and Michael turned around to see Walt standing there, having heard the whole conversation. ("Exodus, Part 2")

After Michael and Walt returned to the United States, Walt moved in with Michael's mother. She was frustrated by Michael and Walt's unexplained absence and the fact that she had to continue to hide their existence and even refer to them by false names. She refused to let Michael speak to Walt because Walt was deeply upset with Michael. It was later insinuated by Tom, uncontested by Michael, that Michael had told Walt he'd killed Ana Lucia and Libby. ("Meet Kevin Johnson")

About three years later, after the return of the Oceanic Six, she took Walt to visit Hurley at the Santa Rosa Mental Health Institute. She first demanded to know whether Hurley would do anything "crazy," and after he assured her that he would not, she left Walt and him alone to talk. ("There's No Place Like Home, Part 2")

Retrieved from "https://lostpedia.fandom.com/wiki/Mrs._Dawson?oldid=1113889"
Community content is available under CC BY-NC-ND unless otherwise noted.