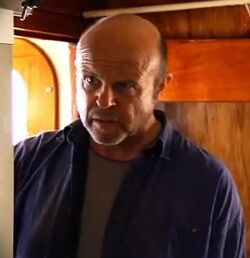 Mr. Ockham is the captain of the Christiane I in the storyline of the alternate reality game Find 815. He is decribed by Sam Thomas as a crusty ol' sea dog and a straight talker. (Find 815 clues/January 8)

When Sam Thomas approached him about joining the expedition to the Sunda Trench, Ockham told him that the ship was crewed up. However, after Sam fixed the broken chart plotter, Ockham let him stay. When Oscar Talbot was questioning Sam's motivations for being on the ship, Ockham told Talbot that they needed him aboard, as the destination might prove hazardous to the electrical equipment.

Retrieved from "https://lostpedia.fandom.com/wiki/Mr._Ockham?oldid=1082594"
Community content is available under CC BY-NC-ND unless otherwise noted.