Hurley, Johnny, and Randy all worked there.

Mr. Cluck's Chicken Shack is a fast food franchise modeled after KFC and Popeyes Chicken. Hurley was an employee—and later the owner—of a Mr. Cluck's restaurant.

Hurley as an employee

Hurley worked at Mr. Cluck's until his boss, Randy Nations, accused him of eating an 8-piece dark meat combo. His boss stated that the company was not made of money, and that if Hurley was made of money, maybe he didn't want to work there. Hurley, having just found out that he won the lottery, quit his job. One of Hurley's co-workers, Johnny, who was also Hurley's best friend, quit when Hurley quit. The two went joy riding that night and spelled out the words "CLUCK YOU" in garden gnomes on Randy's lawn.

Hurley as an owner

Hurley and Randy's roles were reversed after Hurley purchased Mr. Cluck's with some of his lottery winnings. After Hurley decided to re-launch Mr. Cluck's, Tricia Tanaka, a news reporter from the Action 8 News, came and covered the story. During the recording, Hurley told her about his bad luck, revealing that Johnny ran away with Hurley's girlfriend after he learned about Hurley's winnings. Tricia, who complained that his comments didn't fit the "puff piece" they were filming, stopped the interview and went inside to "shoot some B-roll." Suddenly, a meteorite hit the restaurant, killing Tanaka and her cameraman. ("Tricia Tanaka Is Dead")

The particular franchise where Hurley worked, and later bought, was located in the town of Diamond Bar, California. ("Tricia Tanaka Is Dead")

In the flash-sideways world, Hugo Reyes was the owner of the Mr. Cluck's corporation, having purchased it with his lottery winnings. Aboard an Oceanic Airlines flight, Leslie Arzt approached Hurley and asked him to do the Australian accent he used in television commercials, alluding to a commercial similar to the "Comic Con video" seen below. ("LA X, Part 1")

After having met Libby, Hugo moodily ordered a family-size bucket at one of his restaurants. Desmond Hume came over to him and asked if he knew him, then whether he was on Oceanic 815. Desmond pointed out that Hugo was eating a lot of chicken and Hugo explained that he eats when he is depressed. ("Everybody Loves Hugo")

At the time the video was of unknown canon status, it showed Hurley as CEO of Mr. Cluck's, doing a commercial for a new "outback chicken" dish that he had come up with while in Australia. He also mentioned that since he won the lottery, he has had nothing but good luck. 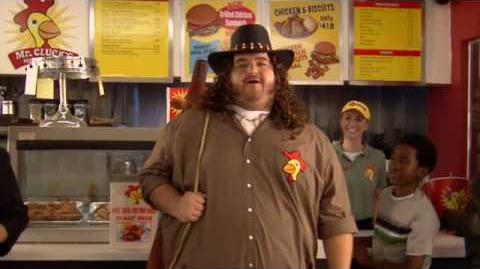 Hurley and Johnny write "Cluck You" in garden gnomes on their former boss's lawn. ("Everybody Hates Hugo")

Johnny, in his uniform inside Mr. Cluck's, contemplates the menu's similarities to that of Popeyes Chicken. ("Everybody Hates Hugo")