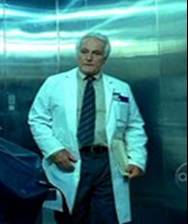 The morgue doctor was the man to whom Jack identified his father's body. He informed Jack that Christian Shephard had died from a massive heart attack brought on by alcohol poisoning at King's Cross in Sydney. Jack decided to take his father back to the United States, though he had trouble getting the casket on the plane because he did not make proper arrangements through a funeral home. ("White Rabbit")

Retrieved from "https://lostpedia.fandom.com/wiki/Morgue_doctor?oldid=1116199"
Community content is available under CC BY-NC-ND unless otherwise noted.