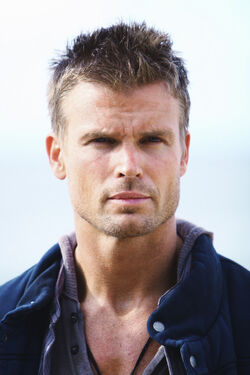 Montand was a member of Danielle Rousseau's science expedition.

Soon after the crash of the science expedition's ship, Montand and the rest of the team discovered an unconscious Jin in the waves, a victim of the Kahana explosion and time travel. Upon returning to the beach, Montand picked up a radio transmission of the Numbers on his radio. When Jin awakened, Montand questioned him, and was frustrated by Jin's disoriented answers. He was eventually called off by Danielle. ("The Little Prince")

Montand disliked Jin, refusing to believe Jin's claims regarding the helicopter and the freighter. However, he ventured off with the rest of the team in search of the radio tower, led by Jin. During the journey, Nadine disappeared. A frustrated Montand, believing Nadine to have simply wandered off, and despite Jin's protests to continue on, began searching for Nadine. Nadine's pack was soon found, and moments later her corpse fell to the ground. Montand fled, running into a nearby clearing before stopping to catch his breath. However, the monster ambushed him from behind, dragging him along the ground toward a hole. He was caught by Robert at the edge of the hole. The Monster paid no heed to Robert's grip on Montand's arm, instead pulling Montand into the hole without his arm, leaving the severed limb above ground. Soon afterward, he was heard calling for rescue and claiming the Monster had disappeared (although this was most likely the monster speaking). The rest of the team, minus Danielle, descended to try to help him. ("This Place Is Death") It seems likely Montand did not survive long after losing his arm as his skeleton was found close to the opening in 2007. ("LA X, Part 2")

When Rousseau was leading a group of survivors to the Black Rock, they entered the Dark Territory, in which she said that her team got sick, and Montand lost his arm; this prompted Arzt to attempt to try to go back to the camp in fear. ("Exodus, Part 1")

His skeleton was later discovered by Hurley when he and the other survivors ventured into the Temple to save Sayid. Hurley commented on the fact that the body was missing an arm. Kate investigated the contents of Montand's backpack and found a book and a set of matches. ("LA X, Part 1") The lighthouse degree of 102 was labeled "Montand", possibly indicating that at one time, he was a candidate. ("Lighthouse")

Retrieved from "https://lostpedia.fandom.com/wiki/Montand?oldid=1110279"
Community content is available under CC BY-NC-ND unless otherwise noted.