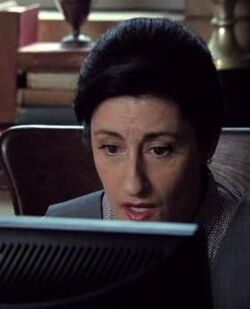 Moira is an archivist at Oxford University. Upon Desmond's inquiry, she searched the university's records for mention of Daniel Faraday, but told Desmond that there was no record of any such person in the university's database. When she inquired as to why Desmond wanted information about Faraday, Desmond apologized for having wasted her time and departed. ("Jughead")

Retrieved from "https://lostpedia.fandom.com/wiki/Moira?oldid=1102723"
Community content is available under CC BY-NC-ND unless otherwise noted.