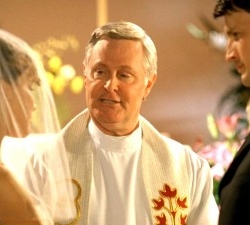 The Minister officiated at the wedding ceremony of Kate and Kevin.

During the ceremony, he said, "What you see is what you get," which visibly struck a nerve with Kate. In an ironic turn, the ceremony monologue also included a sentence where the minister particularly made note of "Monica's" honesty, whereas Kate had deceived everyone in the ceremony into thinking that was her true identity. The minister had a monologue that was largely deleted in the final broadcast.

Retrieved from "https://lostpedia.fandom.com/wiki/Minister_(I_Do)?oldid=1113590"
Community content is available under CC BY-NC-ND unless otherwise noted.