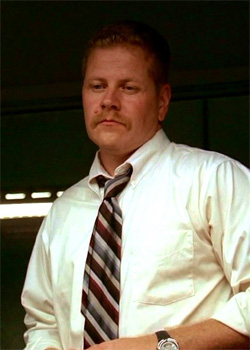 Mike "Big Mike" Walton is a police officer, and later detective, for the LAPD and the partner of Ana Lucia Cortez before she quit the force.

After being put back on the force by her mother, Teresa Cortez, Ana Lucia was assigned to a patrol car with fellow officer "Big Mike." Mike told Ana Lucia he heard about Danny breaking up with her, asking whether she wanted him to "go kick his ass" for her.

Under orders from Ana Lucia's mother, Mike drove to Westwood, "a nice safe neighborhood." Ana Lucia was not satisfied, however, and proceeded to respond to a domestic disturbance call against his wishes. The incident involved a man named Travis who was trying to take a TV Shawna (his apparent girlfriend) claimed was hers. Ana pointed her gun at Travis, but was subsequently told by Big Mike to holster her weapon when she did not respond to "Officer Cortez." Returning back to headquarters, Ana Lucia and her partner began a discussion about her non-compliance, but it was cut short when Ana Lucia found out that Jason McCormack had been caught. ("Collision")

After the rescue of the Oceanic Six

Sometime after working as Ana Lucia's partner, Big Mike was promoted to detective with the LAPD. After Hurley was arrested following a police pursuit, Big Mike conducted the questioning of Hurley at the police station. He accused Hurley of using his celebrity status as one of the Oceanic Six as an excuse to break the law. Big Mike told Hurley that his former partner Ana Lucia had been on Oceanic Flight 815, and asked Hurley if he had met her on the plane; Hurley lied and claimed never to have heard of her. Big Mike left the interrogation room to get a doughnut, but returned when he heard Hurley screaming, apparently at nothing. He threatened to re-institutionalize Hurley, prompting Hurley to beg for such an outcome and thank Big Mike. ("The Beginning of the End")

Retrieved from "https://lostpedia.fandom.com/wiki/Mike_Walton?oldid=1113636"
Community content is available under CC BY-NC-ND unless otherwise noted.