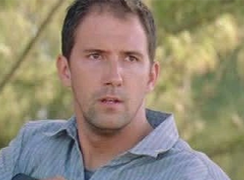 When the submarine arrived at the Island, Mike used the periscope and saw a group of eight people on the beach. He reported this to Charles Widmore, and asked whether they should stop. Widmore commanded him to "proceed as planned." ("Dr. Linus") Later, when the Solenoid coil chamber at the Hydra station had been tested and Desmond had been brought forth for the experiment, Mike asked Desmond if he had any metal on him. ("Happily Ever After") When Sawyer and his people arrived on Hydra Island with the "Elizabeth", Mike belonged to the party that took them prisoner. ("The Last Recruit")

It is likely he was killed during the Man in Black's assault on Hydra Island, or the shoot-out at the submarine dock. ("The Candidate")

Retrieved from "https://lostpedia.fandom.com/wiki/Mike_(Widmore%27s_team)?oldid=1106240"
Community content is available under CC BY-NC-ND unless otherwise noted.