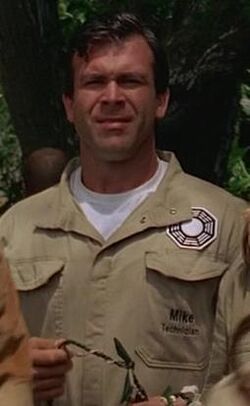 Mike was a DHARMA Initiative technician who along with Casey and others welcomed Roger Linus and Ben Linus to the Island. ("The Man Behind the Curtain") The insignia he wore appeared to indicate that he was attached to the Pearl. Mike's role was a nonspeaking background one, and his name is known only from his wardrobe.

He may have been killed along with other members of the DHARMA Initiative in the Purge, or he may have left the island sometime between 1973 and The Purge.

Retrieved from "https://lostpedia.fandom.com/wiki/Mike_(DHARMA_Initiative)?oldid=1115970"
Community content is available under CC BY-NC-ND unless otherwise noted.