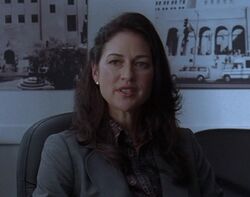 Melissa Dunbrook is the Los Angeles District Attorney who tried to convict Kate for fraud, arson, assault and murder in "Eggtown".

After Kate pleaded not guilty, Dunbrook requested that Kate be remanded (held without bail) for the duration of the trial. She cross-examined Jack, and asked him if he loved Kate, which he untruthfully denied. Later, it appeared that Kate's mother couldn't testify as a witness for the prosecution due to her health, and the judge called recess. During the recess, Dunbrook offered Kate a deal of 4 years in prison. Kate's lawyer declined the offer, asserting that the jury would never permit jail time for Kate, due to her alleged heroism in the aftermath of the crash of Oceanic Flight 815 and the fact that she was killing her father to save her mother from abuse. Dunbrook then offered a deal of time served plus 10 years of in-state probation. Kate agreed to the deal over the objections of her lawyer, telling Dunbrook to give her something to sign because she just wanted the whole thing behind her and wanted to be able to spend time with her son.

Retrieved from "https://lostpedia.fandom.com/wiki/Melissa_Dunbrook?oldid=1095142"
Community content is available under CC BY-NC-ND unless otherwise noted.