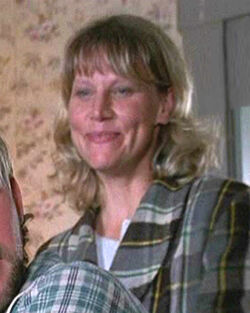 Megan Pace (née Stratton) was the wife of Simon Pace and the mother of Charlie and Liam Pace. She encouraged Charlie's musical inclinations; she told him that he was "special" and bought him a piano with hard-earned money. Liam later sold it without Charlie's knowledge to buy a plane ticket to Sydney.

Liam's wife Karen named their daughter after her. Megan's father left her a ring from his father Dexter Stratton. Megan left this ring to Liam as he was her first born son. Liam later gave this ring to Charlie.

She is referenced in the past tense by Liam in "Greatest Hits" making it likely that she has passed away.

Retrieved from "https://lostpedia.fandom.com/wiki/Megan_Pace_(mother)?oldid=1095251"
Community content is available under CC BY-NC-ND unless otherwise noted.