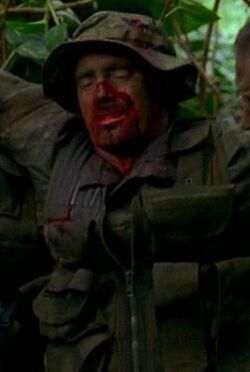 Mayhew was a member of the mercenary team who died on the Kahana after being attacked by the Monster during the battle at the Barracks.

Mayhew was a member aboard the Kahana. Upon reaching the Island, he left on a helicopter piloted by Frank Lapidus to reach the Island. Upon getting there, he was part of the team that killed Karl and Rousseau and kidnapped Alex. ("Meet Kevin Johnson")

Mayhew traveled with the mercenaries to the sonar fence and forced Alex to deactivate it. They then invaded the Barracks, killing Doug, a blonde woman, and Jerome, as well as nearly killing Claire when they blew up her house. Mayhew and the other mercenaries then looked on as Keamy and Ben negotiated over Alex, which ended in Alex's death. It is unknown exactly which role Mayhew took in these affairs, only that he was present. Sometime that night, Ben called upon the Monster to attack the mercenaries in the jungle. Mayhew was then seen running from the Monster out of the jungle, but was seized by the Monster. He attempted to shoot the Monster but he was dragged back into the fray. Mayhew was then picked up by the Monster and thrown fifty feet in the air, ripping his guts out. ("The Shape of Things to Come")

A severely wounded Mayhew was later seen being assisted by Lacour, along with other mercenaries to the helicopter when they were met by Frank, who convinced them to leave as soon as possible. They then continued on to the helicopter, where they headed back to the freighter. ("Something Nice Back Home")

Mayhew was taken out of the helicopter on the freighter, almost dead. The doctor asked what happened to Mayhew, and Keamy described the Monster's attack. Keamy expressed concern for Mayhew, making sure that he was lifted out of the helicopter carefully. Despite the doctor's best efforts, Mayhew died. His corpse was then seen being carried away by two crew members, leading Sayid and Desmond to wonder what killed him. ("Cabin Fever")

Retrieved from "https://lostpedia.fandom.com/wiki/Mayhew?oldid=1115987"
Community content is available under CC BY-NC-ND unless otherwise noted.