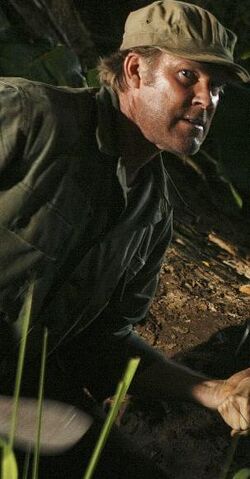 An Other wearing a United States Army jumpsuit bearing the name Mattingly was a member of the group of Others that included Charles Widmore and Cunningham. The group attacked Juliet and Sawyer in the jungle on the Island in 1954 and, armed with a machete, Mattingly was ordered by Widmore to cut off Juliet's hand. As he was about to do so, Locke attacked Mattingly with a rock. Mattingly recovered and was about to kill Juliet with the machete, when Locke hurled his knife into Mattingly's side. Mattingly collapsed and died. Locke then pulled the bloody knife out of Mattingly's dead body. ("The Lie") His body was later seen again during daytime. ("Jughead")

The name "Mattingley" (additional "e") was number 10 among the names of Jacob's candidates written in the cliffside cave. His name had been crossed out. ("The Substitute").

Retrieved from "https://lostpedia.fandom.com/wiki/Mattingly?oldid=1114113"
Community content is available under CC BY-NC-ND unless otherwise noted.