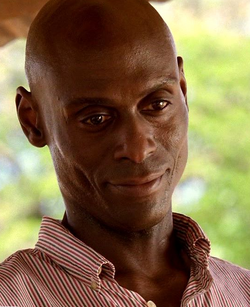 Matthew Abaddon was an agent of Charles Widmore whose job was to get people to "where they needed to be". His name, Abaddon, comes from the Bible's reference to the Angel of the Bottomless Pit, whose job it is to take souls to their destination in the Last Judgement, corresponding to his role in the series.

Chronologically, he was first seen suggesting to John Locke that he take a walkabout in order to find his "purpose in life", an event that ultimately led Locke to the Island aboard Oceanic Flight 815. With Naomi Dorrit, Abaddon also recruited the science team—Daniel Faraday, Miles Straume, Charlotte Lewis and pilot Frank Lapidus—to go to the Island on a mission. Sometime after the rescue of the Oceanic Six, Abaddon, posing as a representative for Oceanic Airlines, visited Hurley at the Santa Rosa Mental Health Institute, suspiciously asking if "they" were still alive. Sometime later, he was assassinated by Benjamin Linus while assisting Locke once again.

While much of Abaddon's past is vague, he claimed to have once been on a walkabout across the Outback, an experience he said had changed his life. Sometime after this, Abaddon was working at a rehabilitation center as an orderly. Taking an interest in a patient there by the name of John Locke, he urged the paralyzed man to take a walkabout for himself. Locke dismissed the idea as foolish and would not encounter Abaddon for several years. ("Cabin Fever")

As an associate of Charles Widmore, Abaddon took a close interest in several of Widmore's plans. Assembling a science team to travel to the Island in search of the wreckage of Oceanic Flight 815, Abaddon was able to recruit Naomi Dorrit, Daniel Faraday, Miles Straume, Charlotte Lewis, and pilot Frank Lapidus for an expedition aboard Widmore's ship, the Kahana. Assuring Dorrit that all the other members of the crew were well equipped to handle whatever they faced on the Island, Abaddon ominously stated that there were no survivors of Flight 815. ("Confirmed Dead")

Following the return of the Oceanic Six, Abaddon posed as an attorney for Oceanic Airlines when he visited Hurley Reyes at the Santa Rosa Mental Health Institute and offered to improve Hurley's living conditions by moving him to a nicer hospital. When Reyes became suspicious of the man's motivations behind the inquisition, Abaddon inquired if "they" were still alive. Agitated, Reyes screamed for a nurse and Abaddon abruptly left. ("The Beginning of the End")

Not long after, Abaddon was asked by Widmore to travel to Tunisia to meet with an old acquaintance, John Locke. Serving as Locke's driver, Abaddon was ordered to take the man wherever he requested, which happened to be in search of the Oceanic Six. While Locke's attempts to persuade Sayid Jarrah and Hurley Reyes to return to the Island were unsuccessful, Locke remained persistent as they traveled to see Walt Lloyd and the grave of Helen Norwood. Before traveling to the grave site and talking to Kate Austen, Locke inquired what Abaddon's job was. Stating simply that he got people where they needed to be, they went to Norwood's grave where Abaddon posited that Locke's fate, and his death, may be predestined. Locke argued that he didn't want to die, and if it was predestined then that would remove the choice. Abaddon, ending the conversation, simply remarked "Hey, I'm just your driver". ("The Life and Death of Jeremy Bentham")

While preparing to leave the cemetery, Abaddon was suddenly shot by an unseen attacker, his blood showering the now broken rear windshield of the car. Completely astounded, he took two more bullets to the torso before finally collapsing dead on the road. Benjamin Linus later told Locke that it was he who had shot Abaddon, who he claimed was "extremely dangerous" and would have tried to kill Locke in due time. ("The Life and Death of Jeremy Bentham")

The name "Abaddon" is the name of the biblical Angel of the Abyss (Revelation 9:11). Greek for "destruction" or "the destroyer", Abaddon the Angel is pictured as a human-sized locust, and is known as the lord of pestilence. The root for "Matthew" in Hebrew is "Gift from God." Additionally, in Hebrew, Abaddon is synonymous for Hell or destruction. Very loosely translated "Matthew Abaddon" can be read as "Gift from the god of hell." Jesus refers to God the Father as "Abba" while "-don" is the first three letters of "donate," which comes from the Latin root for "give." The name of the character in the episode referred to by the press release using the spelling "Matthew Abbadon" might be interpreted "Gift of God/Father Gift." Abaddon, rendered in Greek as Apollyon and described as king of the locusts which rose at the sounding of the fifth trumpet.

Many Biblical scholars believe Abaddon to be Satan or the Anti-Christ. Others have stated that he may be one of the lesser demons of hell, or even a dark angel. [1] Revelation 8 only has 13 verses. Revelation 9:2 is an alternate way of numbering Revelation 8:15 (815).

In the press release for "The Beginning of the End" his name is misspelled with two "b"s and one "d"; in the press releases for "Confirmed Dead" it is spelled "Abaddon". During chapter 1 of the Find 815 alternate reality game, a clue word for Season 4 was needed to progress. The game could be played on either ABC's website or Channel 7's website. The game revealed the clue word "Matthew" on ABC's website and "Abaddon" on Channel 7's site.

A number of sources suggested based on casting information that this character was to be named "Arthur Stevens". [2] When asked about the subject, the producers said that fake names are used and fake scenes are read for characters to preserve secrecy.

The casting call described Arthur Stevens as "Appearing in 401 and 402, with possibly more eps down the line. He is a ruthless corporate recruiter, tall and thin, with a chilling presence." [3]

For fan theories about these unanswered questions, see: Matthew Abaddon/Theories

Retrieved from "https://lostpedia.fandom.com/wiki/Matthew_Abaddon?oldid=1117560"
Community content is available under CC BY-NC-ND unless otherwise noted.