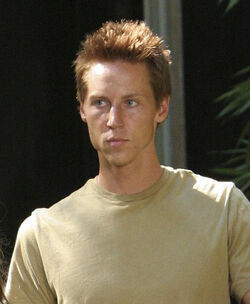 Matthew was an Other who seemed to have some medical experience. Matthew is credited as a character in some episodes, while in others he appears as a part of the background cast.

Matthew was first seen when he was a member of the party that captured Michael and brought him to the Decoy village, and at the Pala Ferry. ("Three Minutes") ("Live Together, Die Alone, Part 1")

Later Matthew was part of Colleen's strike team which was sent by Ben to capture the survivors' sailboat. ("The Glass Ballerina")

With the assistance of Jason, he administered an injection into Sawyer's chest in the Hydra operation room. Later, he and Jason accompanied Ben and Sawyer on their journey to the Hydra Island Lookout. ("Every Man for Himself")

Matthew was one of the Others who was hit by a rock from Alex's slingshot the day she stormed the work camp. ("I Do")

Matthew was a part of the group Kate watched donning gas masks while preparing to leave the Barracks, and later appeared at the second camp. ("Left Behind")

Matthew was one of Pryce's "ten best" who took part in the raid on the castaways' camp. He was shot in the chest and killed by Jin during the raid. ("Through the Looking Glass, Part 1")

Retrieved from "https://lostpedia.fandom.com/wiki/Matthew_(Other)?oldid=1106024"
Community content is available under CC BY-NC-ND unless otherwise noted.