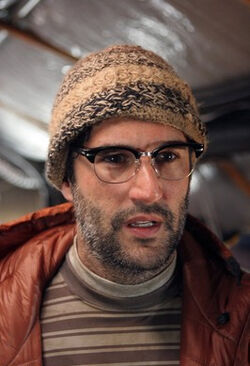 Mathias is one of the staff who manned Penelope Widmore's tracking station. He speaks Portuguese.

Mathias was playing chess with Henrik in the tracking station when their computer started beeping. Henrik then typed something into the computer, while Mathias called Penny, speaking English. He reported to her about an electromagnetic anomaly, informing her, "I think we found it." ("Live Together, Die Alone")

Retrieved from "https://lostpedia.fandom.com/wiki/Mathias?oldid=1097120"
Community content is available under CC BY-NC-ND unless otherwise noted.