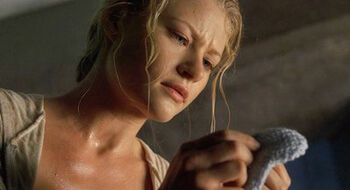 "Maternity Leave" is the fifteenth episode of Season 2 of Lost and the 40th produced hour of the series as a whole. When Claire suspects Aaron might be sick, she sets out on a mission to find a vaccine to help him, and on the way begins to unravel the mysteries of her past memories whilst kidnapped by Ethan on the Island. Unlike in most other episodes, the flashback sequences take place on the Island.

Claire lies in a medical room, as her physical state is examined, casually discussing her baby. As the "doctor" retrieves medicine, he is revealed as Claire's kidnapper, Ethan Rom. Injecting a bemused Claire, the shocking sensation causes her to jump back to reality.

Later, Claire is again in the medical room, now notably more delirious. Ethan once again injects her with a substance, and a drugged Claire makes no attempt to stop him. She is then led along a corridor outside, noticing both a hatch doorway and a DHARMA logo. Ethan brings her to a nursery room, which is filled with colorful toys and pictures. She wonders about Charlie, and Ethan explains that he let him go back. Moving towards a crib, Claire turns on a mobile, covered in toy airplanes. As the music plays, Ethan excuses himself to speak to the man who took Walt from the raft, shown clean-shaven and dressed in clean clothes for the first time. ♪ He verbally scolds Ethan for not following his orders in "making a list" before kidnapping Claire, and the two argue as Ethan defends himself by pointing out that the survivors had a flight manifest. Before he closes the door, Claire overhears the man speaking about "him" and worryingly musing about what might happen when he finds out.

In the nursery, Claire finishes crocheting a sock for her unborn baby. Ethan enters, and sneaks her out for a walk. They stop at a tree stump, sitting down as Claire hobbles about (undoubtedly a result of the drugs). Ethan offers her a canteen, and as Claire drinks she comments that the liquid inside is extremely sour. As the two chat, Ethan tells Claire that he wants her to be sure about the Others taking her baby, and that they are "good people."

At night, a teenage girl awakens Claire, who tells her to be quiet. She says that Claire has to get out of there, and tells her that the Others are planning to cut her baby out of her. As a drugged Claire struggles, crying for Ethan, the girl uses chloroform to knock Claire unconscious. As Claire blacks out she is told "one day you'll thank me for this."

Claire wakes up in the jungle, where she hears Ethan, who is with the Others, shouting for her. Danielle Rousseau emerges from the dark, pleading for her to keep quiet as Claire repeats that she's sure about giving them her baby. Rousseau puts her hand over Claire's mouth, and a struggle ensues between the two, during which Claire badly scratches Rousseau. Her response is to knock Claire down, rendering her unconscious by hitting her with the butt of her rifle. ♪

Claire strolls the beach trying to calm an unsettled Aaron, but becomes worried when she notices that he is developing a fever. Enlisting the help of John, who offers to get Jack from the Hatch, she waits by her tent. At the Hatch, Locke informs Jack of the events, and the two swap shifts so Jack can tend to Claire and Aaron.

Back at the beach, Claire hears a noise and turns to find not Jack, but Rousseau. Remembering the last time Rousseau came near Aaron, Claire shouts at the French women to get away from her. When Rousseau comments that Aaron is sick, and that Claire "doesn't remember," she experiences a series of extremely short flashbulb memories, from times she cannot accurately recall. Amongst many images, she sees a syringe, a teenage girl, and herself scratching Danielle's arm. As she stands stunned, Kate intervenes, forcing Rousseau to leave at once. As Kate moves to see if Claire is alright, the young mother tells her that Rousseau had said "there's something wrong with him."

With Jack back from the Hatch, Claire argues with him that something could be terribly wrong with Aaron's health. Though she tells Jack she's OK, she still seems extremely worried. The next morning, Claire seeks Libby. As a psychologist, she believes Libby can help cause some kind of memory regression, allowing her to remember what happened in the jungle after Ethan abducted her. As the two women sit meditating, flashes of memory once more overcome Claire's psyche, causing her to scream, shouting that she remembers Ethan. Ordering Libby to do the technique again, she is warned that her memory could simply be combining experiences of other memories in the past blended together, but is adamant that what she saw was real, and that she was drugged and given something. Now fully convinced that Aaron is sick, Claire proclaims that she needs to find the room in her flashback. She asks that Kate help her.

At the Hatch, Henry is still treated as a prisoner, although Locke gives him a book to "pass the time." Jack and Locke then argue on what the "long term plan" is with Henry, but Jack says that they don't have a plan for the button, yet they keep pushing it. Jack asks Locke to tell him a better plan, and Locke has no answer--but someone does. "How about you let me go?" Gale calls from the armory. He's heard everything.

In the jungle, Eko cuts down a tree, before heading to the Hatch to ask if he can borrow a saw. While there, he seems to hear Jack hiding "Henry Gale."

At the beach, Sawyer is visited by Kate, who asks that he give her a gun. On his refusal, she grudgingly admits that Claire is attempting to find Rousseau so she can find some important medicine for Aaron. Sawyer acknowledges that the mission is strictly "no boys allowed", and offers Kate a choice of firearm.

Claire hands Aaron over to Sun, who debates that a mother should not leave her child. Claire retorts by asking Sun if she's a mother, to which she replies "no" curtly. As Claire prepares to leave, Sun's words "are you sure you want to do this?" trigger another flashback memory in her mind of Ethan and the medical room. Returning to an aware state, Claire shakily walks away from Sun, just as Kate arrives ready to leave. Kissing Aaron goodbye, the two leave to find Rousseau. In the jungle, they find the French woman by following her tracks, and Claire pretends that she fully remembers what happened to her. Inferring between the short flashes of memory she has seen, she orders Rousseau to take her back to where she scratched her. ♪ Danielle agrees, commenting that it is not far from their current location.

Back at the beach, Eko reveals to Jack that he knows there is a man in the Hatch. He asks to speak to him alone, and implies that if Jack doesn't agree, he will share his secret with the rest of the group.

Trekking through the jungle, Rousseau stops in the middle of the undergrowth, telling Claire and Kate that they are here (the place where Claire scratched her). She asks Claire where to go next, but Claire shouts back that Danielle should know, stating that she scratched her because she was trying to take Claire back to the Others. Rousseau realizes that Claire does not accurately remember what happened, calling her a liar for making her bring the three out this far. As she grabs Claire, Kate pulls out a gun, but Rousseau moves towards it, pleading for Kate to "do it." Meanwhile, Claire has run out into the jungle, and notices a familiar tree stump, remembering her conversation there with Ethan.

Kate and Rousseau catch up to her, and Claire begins to frantically run ahead through the undergrowth, searching for something as the rain tumbles down. As she pulls on some leaves, she uncovers a camouflaged material, and with Kate pulls it away, revealing a set of DHARMA hatch doors. The three women stand in amazement, and pulling the doors open, find a stairwell leading down.

Inside, Kate retrieves some flashlights and the three begin exploring the station. Claire heads to the nursery room from her memories, which she finds is now mostly bare. Meanwhile, Kate investigates a locker room, where she finds torn clothes and a hat very similar to that worn by the bearded man who took Walt from the raft. She then opens a case, which contains, amongst other items, some "theatrical glue" and a fake beard. As Claire continues examining the nursery, she finds the sock she recalls crocheting, causing her to remember the teenage girl who saved her from the Others.

The three women now converge on the medical examination room. They open the fridge which Claire remembers was the place Ethan kept the vaccine he would inject her with. However, finding it empty, Claire relinquishes her hope of finding a cure for Aaron. Turning to Danielle, she shouts that she must know where it is. She then looks at her scratched arm, which results in the final part of her missing time being recalled, in which she remembers Danielle saving her. ♪

With her memories now fully regained, Rousseau explains to Claire that she carried her back across the Island to her camp, rightly leaving her where she thought she would be found. ♪ She moves to leave, explaining that Claire wasn't the only one who did not find what they were searching for. After returning Claire and Kate to a closer position to their camp, Danielle says it is time for her to go. ♪ However, before she leaves, Claire comments that a young girl with blue eyes helped her, just like Danielle did. Although there is no guarantee to Rousseau that the girl was Alex, it gives her some comfort that her daughter may still be alive and well. With the parting sentiment that she hopes Aaron is not infected, but that if he is Claire must do what is necessary, Rousseau departs.

Back at the Hatch, Eko is granted his private moment with "Henry Gale." During this time, a placid Eko confesses to Henry that he killed two Others on his first night on the Island, and admits that he is sorry for his actions, asking for forgiveness. As a result of this disclosure, Eko unsheathes his dagger, using it to cut off the two small bundles of hair he had grown on his chin.

Meanwhile, Jack examines Aaron, informing Claire that the fever is gone. A much relieved Claire thanks him for his efforts, and then gives Aaron the sock she had made for him. With tears in her eyes, she tells Aaron that she had wanted them to take him, but that she now realized that they were destined to be together. Telling him that she loves him, the two share a caring moment together.

John enters Henry Gale's cell, offering him some food. Henry reveals that he heard an earlier conversation about authors. The two philosophize about morality and schools of thought, before Henry comments about Jack "calling the shots." Locke immediately disagrees, saying that he and Jack make mutual decisions. ♪ However, as he leaves the cells John angrily throws cutlery from the counter. As it would appear, Henry's words hit closer to home than Locke would like to concede.

This episode introduces two motifs, one for Alex and Danielle and a second that plays when characters enter or exit DHARMA stations. Both appear in the Season 2 soundtrack cue "Claire's Escape".

For fan theories about these unanswered questions, see: Maternity Leave/Theories

Retrieved from "https://lostpedia.fandom.com/wiki/Maternity_Leave?oldid=1116930"
Community content is available under CC BY-NC-ND unless otherwise noted.