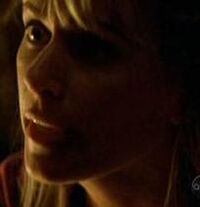 Mary Ford was the mother of James "Sawyer" Ford. She was killed by her husband, who then committed suicide, after they were both conned by Anthony Cooper, then known by the alias Tom Sawyer. She presumably engaged in adultery, thus prompting her husband's rage. Mary warned Sawyer to hide under the bed, making it seem like he was at his grandparents' house.

In "The Brig", Sawyer told Cooper his mother's name was Mary and Cooper remembered her. He said, she practically begged him to take her $38,000 dollars and rescue her from her "sorry little life." Cooper said he only took her money and wasn't responsible for what James' father did.

Retrieved from "https://lostpedia.fandom.com/wiki/Mary_Ford?oldid=988628"
Community content is available under CC BY-NC-ND unless otherwise noted.