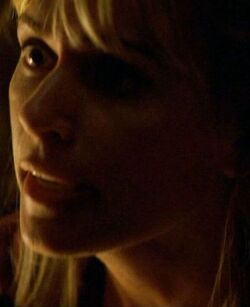 Mary Ford was the mother of James "Sawyer" Ford. At some point, Mary was conned by Anthony Cooper, a con man who at that point was going by the alias "Tom Sawyer". Mary engaged in adultery with Cooper (as revealed in Sawyer's letter), who manipulated her and swindled her out of the family's savings. Mary's husband, James' father, eventually discovered this, and in a fit of rage, he shot and killed Mary before turning the gun on himself. Before Mary's husband entered her home to commit the murder-suicide, Mary urged her then 8-year-old son to hide under the bed and be quiet, which likely saved his life as his father didn't see him (but James was hiding right under the bed that his father was sitting on as he killed himself, and he saw his father's legs go limp). James was later present at her funeral in "The Incident, Part 1".

In "The Brig", Sawyer finally confronted Cooper on the rig of the Black Rock. Sawyer told Cooper his mother's name and location (Jasper, Alabama), and Cooper remembered her. As Cooper put it, Mary "practically begged [Cooper] to take her $38,000 dollars and rescue her from her 'sorry little life.'" Cooper admitted to taking the money, but trivialized his involvement by saying he wasn't responsible for what James' father did.

Retrieved from "https://lostpedia.fandom.com/wiki/Mary_Ford?oldid=1114948"
Community content is available under CC BY-NC-ND unless otherwise noted.