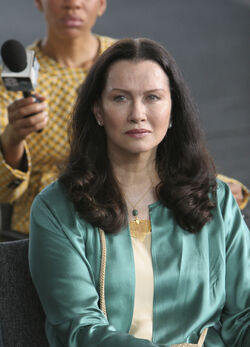 Margo was not shown at Jack's wedding, though she may have attended.("Do No Harm") Christian admitted on that day that he had made the wrong choice by marrying Margo. ("The Watch")

When Christian went missing in Australia she convinced Jack to go after him, saying he wouldn't get to say no "after what he did," in reference to Jack's causing Christian to lose his medical license. ("White Rabbit")

After the return of the Oceanic Six, she was awaiting Jack at the runway. She was extremely glad to see that he had returned safely. Afterward, she attended Christian's funeral. She left when it was over and returned home to wait for Jack. ("There's No Place Like Home, Part 1")

Margo talked to Jack via cell phone after he landed at LAX. Jack was frustrated that his father's casket had been lost. ("LA X, Part 2")

Margo later called Jack as she was unable to locate Christian's will among his papers. After he arrived to assist her, she found it at last, but was puzzled by the mention of someone named "Claire Littleton". When she offered him a drink, Jack refused, leading Margo to say, "good for you." ("Lighthouse")

For fan theories about these unanswered questions, see: Margo Shephard/Theories

Retrieved from "https://lostpedia.fandom.com/wiki/Margo_Shephard?oldid=1113984"
Community content is available under CC BY-NC-ND unless otherwise noted.