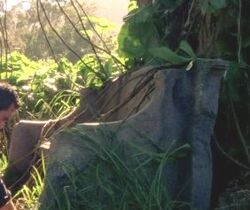 Man in Black's bench is a ancient stone bench in an unspecified location in the jungle on the Island. As seen in "Ab Aeterno", the Man in Black sat here in 1867 after roasting a pig for Richard to help recover his strength. It was here Richard accepted a dagger from the Man in Black, who asked him to kill Jacob. Later, Richard returned to the site to tell the Man in Black he could not complete the task. The Man in Black expressed regret at Richard's choice, and stated that his offer would stand if Richard ever changed his mind. He then returned to Richard a cross pendant, that he claimed to have found on the Black Rock, and vanished. Despondently Richard buried the necklace in the soil near the stone bench, behind which was a young sapling with two forked branches.

140 years later, Richard returned to the bench site, finding the sapling had grown into a mighty tree. After digging up the pendant he called out to the Man in Black and renounced his earlier choice, but instead Hurley emerged from the jungle nearby. With Hurley as a medium, Richard was able to communicate with his deceased wife Isabella, seemingly restoring his faith. Hurley and Richard continued to talk nearby the bench, while the Man in Black observed from a distance.

For fan theories about these unanswered questions, see: Man in Black's bench/Theories

Retrieved from "https://lostpedia.fandom.com/wiki/Man_in_Black%27s_bench?oldid=1035081"
Community content is available under CC BY-NC-ND unless otherwise noted.