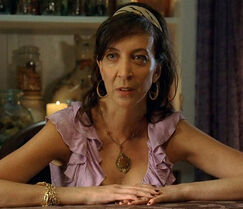 Lynn Karnoff was a woman who posed as a fortune-teller to Hurley. ("Tricia Tanaka Is Dead")

She told Hurley his fortune using tarot cards. The first card told her he had won money. The second, the Six of Swords, told her it had brought him misfortune. She claimed to see the Numbers and listened to them. She said they were cursed and pulled a third card, Death.

She said his curse could be removed and asked him to take off his clothes while she started preparing ingredients to exorcise his curse. He offered her a thousand dollars to admit that his dad paid for his reading. She acted offended but then relented and admitted it after being offered ten thousand dollars. Hurley stormed out. ("Tricia Tanaka Is Dead")

In the flash sideways, Lynn Karnoff worked at the OC staffing services, a temp agency that Hurley owned. She was doing a job interview with John Locke and was asking questions that made no sense to him, such as what kind of animal he would consider himself. Fed up with with her approach, John demanded to see her supervisor. Lynn complied and brought Rose Nadler over to speak with him. ("The Substitute")

Retrieved from "https://lostpedia.fandom.com/wiki/Lynn_Karnoff?oldid=1114809"
Community content is available under CC BY-NC-ND unless otherwise noted.