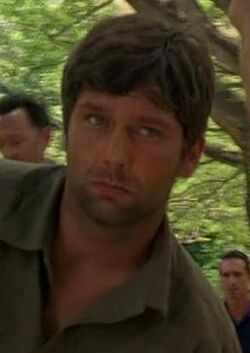 Luke was a member of the Others. Sawyer mentioned that Luke seems to have some sort of martial arts training when he explained to Kate that he kissed her to find out how they fight.

Before Hydra Island, Luke lived at the Barracks. One morning Luke said good morning to Juliet as she raced to confront Ben about his tumor. ("One of Us")

A few months later Luke worked on Hydra Island. Luke was seen assisting Danny at the quarry, where he appeared to be in charge of guarding Kate and Sawyer. He was next seen engaging in conversation, almost flirting with Juliet, when Sawyer suddenly kissed Kate. Luke and Danny rushed out to separate the two, but he was elbowed in the face by Sawyer, who knocked him down. ("The Glass Ballerina")

He was playing chess with Ryan Pryce in the Others' camp when Ben came back from taking Locke to see Jacob. ("Greatest Hits")

Luke was one of Pryce's "ten best men" who took part in the raid on the castaways' camp. After Luke witnessed five of his fellow Others die, he was almost blown up by Jin. Luke fired his rifle at Jin, missing until Jin shot him through the chest. ("Through the Looking Glass, Part 1")

Retrieved from "https://lostpedia.fandom.com/wiki/Luke?oldid=1106025"
Community content is available under CC BY-NC-ND unless otherwise noted.