Articles are listed in order of newest article first.

Exposé is a hit television series within the series Lost. In the hour-long action drama, strippers fight criminals under the tutelage of their strip-club owner father figure. The series has had four successful seasons, and was produced by Howard L. Zukerman until his death. Among its cast was guest star Nikki Fernandez, a passenger on the ill-fated Oceanic Flight 815, and actor Billy Dee Williams, who is an actual person. more...

Oceanic Airlines Flight 815 was a scheduled flight from Sydney, Australia to Los Angeles, California, United States, on a Boeing 777. On September 22, 2004, the airliner, carrying 324 passengers, deviated from its original course and disappeared over the Pacific Ocean. This is the central moment in the series Lost and the personal chronological beginning of the main characters' exploits on the Island.

Flight 815's physical breakup was due to Desmond Hume failing to enter a code into the Swan station computer, causing a large burst of electromagnetic energy. The true cause of the plane's off-course deviation and arrival to the Island's airspace was Jacob, the supernatural entity who protected the Island. Jacob brought the plane because many of the flight's passengers were candidates to replace him as protector. (more...)

It was Season 3, Episode 5, "The Cost of Living" when we first saw the face of a man who wore an eyepatch, a face that would leave us wondering and guessing for months. It was not until 6 episodes later that we finally learned who Mikhail Bakunin was. He quickly became one of the most hated or loved Others depending on how you looked at it. Mikhail was Soviet soldier who lived in the Flame, stationed there to manage communications with the outside world. After being shocked by a sonic fence, beaten up by Locke and shot with a spear gun Mikhail finally perished in "Through the Looking Glass, Part 1" when he detonated a grenade outside the Looking Glass station. Although his role was short his position among the Others stands clear as a man with not only high pain tolerance. (Read More)

Michael Giacchino composes the musical score for Lost, and has written the scores for many other popular television series, movies, and video games. He won an Oscar in 2010 for his score for the Disney/Pixar film Up.

Michael Giacchino majored in film production at New York's School of Visual Arts and later studied music composition at Juilliard and UCLA. His first major composition was for the video game The Lost World: Jurassic Park, and he has since provided the scores for other video games such as Call of Duty and Call of Duty: Finest Hour. After having heard his game music, J.J. Abrams asked him in 2001 to provide the soundtrack for the show Alias, and this working relationship led Abrams to ask Giacchino to compose for Lost. Giacchino has since worked with Abrams on Mission:Impossible III, Cloverfield, Star Trek, and Fringe. (more...)

This episode was simulcast in many countries. Italy, Ireland, Israel, Spain, Portugal, Turkey and the United Kingdom showed the episode at the same time as in the West Coast of the USA. This meant an early morning broadcast in European countries.

On the Island, Jack and the Man in Black play out their last moves as the survivors make their final choices, and the true nature of the flash sideways is revealed.. (more...) 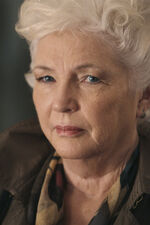 Eloise Hawking, also known as Ellie, was a former leader of the Others and the mother of Daniel Faraday by Charles Widmore. While on the Island, she unwittingly shot a man who turned out to be her adult son, visiting from the future -- an act that forever changed her life. Eloise then helped Daniel's friends by trying to detonate a hydrogen bomb, in an effort to change the future. After leaving the Island, she resided for a time in Oxford, England, where she pressured her son to achievement as a researcher in theoretical physics. Her foreknowledge of future events based on her encounter with her time-travelling son gave her a somewhat omniscient air in her guidance of her son. (more...) 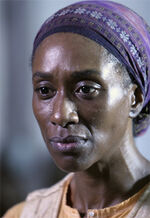 Beatrice Klugh, more commonly known as Bea, was a member of the Others who seemed to have a position of leadership within the group on a similar level to Tom Friendly. On her first appearance, she introduced herself as Ms. Klugh, and Bea was revealed to be the shortened version of her first name by Tom at a later date. Ben and Juliet referred to her by her full name. Beatrice was shot dead at the Flame by Mikhail to prevent the survivors obtaining information from her about the location of the Barracks. (more...) 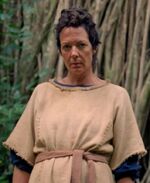 The foster mother of Jacob and his brother murdered their birth mother Claudia just after the twins were born, and raised the twins herself. She was the protector of the Source until shortly before her murder by Jacob's brother.

According to the Man in Black, she was "crazy" and responsible for his growing pains as a child ("a long time ago") that continue to this day. (more...) 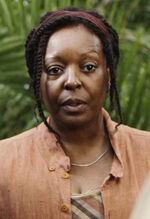 Rose Nadler was one of the middle section survivors of Oceanic Flight 815. She was on the plane with her husband Bernard and was separated from him for 48 days following the crash. Rose was a well-meaning, caring woman who was apparently healed from her terminal cancer after arriving on the Island, similar to Locke. After time-travelling to 1977, Rose and Bernard lived in peaceful seclusion in a cabin near the beach, refusing to get involved in any kind of conflict. They reemerged briefly to help Desmond before returning to their hut and were some of the last survivors remaining on the island when the series ended. (more...) 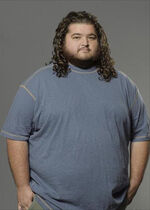 Hugo Reyes, more commonly known by his nickname "Hurley", was one of the middle section survivors of the crash of Oceanic Flight 815. Hurley's father disappeared when he was ten and did not return until almost 17 years had gone by. During his father's absence, Hurley developed an eating disorder, and later a traumatic accident landed him in a mental asylum where he started seeing an imaginary person. He has been overly-conscious about his sanity since. While employed at Mr. Cluck's, Hurley won the lottery by playing the mysterious numbers. Because of a series of unfortunate incidents following his win, he believed himself to be plagued with bad luck because of the numbers and has searched for an answer to the curse. (more...)

Retrieved from "https://lostpedia.fandom.com/wiki/Lostpedia:Featured_article_archive?oldid=1117297"
Community content is available under CC BY-NC-ND unless otherwise noted.