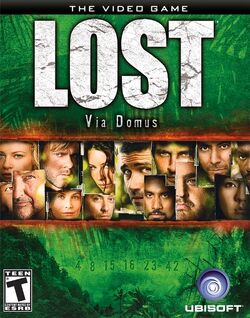 Lost: Via Domus (originally known as Lost: The Video Game) is the first official game of the series for video game consoles and PCs. The game was developed by Ubisoft Montreal under the direction of producer Gadi Pollack. Announced on 22 May 2006, it was released on February 26, 2008 in the USA, February 28 in Australia and February 29 in the UK, and February 13, 2009 for Steam users. The game is available on Xbox 360, PlayStation 3, and Windows PCs, using the YETI Game engine developed for the Ghost Recon: Advanced Warfighter and Beowulf games. It was officially unveiled with a screening of its trailer during the Comic-Con 2007 panel. 'Via Domus' is Latin for what can be translated to "[the] way home".

The game follows a character new to the Lost universe, Elliott Maslow, a photojournalist with amnesia whose background is revealed over the course of the game through flashbacks. Elliott has not ever been featured in the show. However, the producers have stated the game's storyline is not canon to the show [1]. Part of the game, including the DHARMA stations and the blast door map, is considered canon (See Canonical merit, below).

Elliott Maslow is a passenger on Flight 815. After the crash, he lost his memory. He initially searches the Island for his possessions to try to regain his memories. A man named Beady Eyes, who was also a passenger, threatens to kill him. Elliott eventually discovers the Swan station. While at the station,

the other survivors review the content of a laptop computer he had on the plane and find it full of information on matters like chemical weapons. Elliott is briefly imprisoned at the Swan. After he escapes with Kate's help, he discovers the entrance to the walled-off portion of the Swan and blows open the door with dynamite from the Black Rock.

After Elliott shuts down a reactor at the Swan, he follows his compass to the fence around the Barracks, where he meets Juliet. Juliet opens the fence for him and then he enters the underground portion of the Flame. He eventually reaches the surface structure of the Flame and finds Mikhail held captive by Beady Eyes. Elliott shoots Beady Eyes and is then captured by the Others.

Elliott is taken to the Hydra Station where he meets with Ben Linus and Juliet. Ben offers him a boat and a way home in exchange for luring Jack into a trap at the Black Rock. Elliott leads Kate and Jack into the trap. But then he has second thoughts and helps Jack/Kate to escape by firing a bullet into some dynamite. Elliott is left behind wounded by Jack and Kate. He is later found by Juliet and brought to some cliffs near the ocean. He then runs to the beach to grab the boat Ben offered before the Others destroy it. As the Others reach the boat, Locke appears and shoots the Others which saves the boat for Elliott. Locke then wishes Elliot well and allows him to sail away. However, at a later point at sea, the sound associated with the day the Swan implosion is heard. Elliott looks to the sky where Oceanic 815 is breaking up in mid-air, then he passes out. He wakes up at the crash site on Day 1. Everything seems to be repeating itself when suddenly Lisa stumbles out of the wreckage, covered in blood, and yells happily, "Elliott! Elliott! Oh my god, we made it. We're alive."

Elliott is a photojournalist, romantically involved with his colleague Lisa. Lisa is writing an exposé on Zoran Savo, a shady character with ties to the Hanso Foundation and Thomas Mittelwerk. He wants the story for himself, and to that end he tips off Savo's bodyguards to Lisa's reporting. Savo orders her to be executed; Elliott escapes with photographs of the entire affair, but Savo finds out. He orders Beady Eyes, his bodyguard, to follow Elliott onto the plane and destroy the photographs.

Many characters from Season 1, 2, and 3 of Lost appear in Lost: Via Domus. Walt, Rose, Bernard, Boone, Shannon, Nikki, and Paulo are among the main and supporting characters that are not in the game.

Many locations from Season 1, 2, and 3 of Lost appear in Lost: Via Domus.

Via Domus consists of several types of gameplay. Much of the game is spent in interactive conversation with other characters, while the rest consists of jungle exploration, wiring repair puzzles, rediscovering Elliott's past with the use of flashbacks, photography, and collecting important objects. Bonus content can be unlocked by taking photographs of objects that had importance in the show, such as Kate's plane, Charlie's guitar, Kelvin's DHARMA jumpsuit, and the book Turn of the Screw. These will also allow you to gain achievements on the Xbox 360 version of the game.

The game's producers have taken artistic license with some of the show's continuity so as to include more action. For example the Others now stalk the jungle with rifles, willing to kill anyone who comes within range, as well as the Monster being much more active.

The producers have stated that the storyline of Lost: Via Domus is not canon to the show [2]. However, these aspects of the game are official canon to Lost:

The Windows version requires the following:

The supported cards are

Lost: Via Domus was received with average reviews by critics and the fan community. On GameRankings, the game has a an average ratio of 58% [5]. Metacritic's score for the game is 52 [6]. Many sources indicated that only fans of Lost would enjoy the game, while others would not understand the plot [7] and/or enjoy it [8][9].

Negatively received components included: the poor voice acting [10] (with IGN calling Locke an "old timey prospector" and Sawyer "Huckleberry Hound" [11]), the short length of the game [12], the "poorly implemented" action sequences [13], and the appearance of the characters [14] (Jorge Garcia commented on his blog that Hurley was the scariest thing he'd ever seen in a video game [15]).

As presumed, Zygos Games had heard rumours that Lost: Via Domus might be getting a sequel. If so, the game was set to be released in 2010, after the show's end, but it would not be a direct sequel of Via Domus. Ubisoft hoped that this would help bypass some of the heavy limitations of the original game, for instance they weren’t allowed to show all of the island. However, nothing concrete was ever apparently developed for a sequel.

Please note, that although the series' producers state this game is only loosely canon, the fact that the story reboots itself to the first day of Oceanic Flight 815's crash on the island at the end of the game means that ALL of these continuity errors really mean nothing. Meaning technically nothing that happens in the game contradicts anything in the TV series.

Did not appear in the game

There were many things that were supposed to appear in Via Domus but never did. Many screenshots from the launch trailer never appeared in the final version.

For fan theories about these unanswered questions, see: Lost: Via Domus/Theories

Add a photo to this gallery

Retrieved from "https://lostpedia.fandom.com/wiki/Lost:_Via_Domus?oldid=1112228"
Community content is available under CC BY-NC-ND unless otherwise noted.