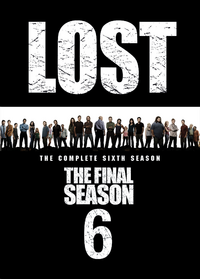 Lost: The Complete Sixth and Final Season is the sixth box set compilation of Lost episodes, featuring all 18 episodes produced as part of the sixth season, as well as a number of special features. The set was released in North America on August 24, 2010. The set was available in UK on September 13, 2010 and Australia and New Zealand on October 20, 2010. The cost of the standard DVD version is priced at $59.99 SRP, and the high-definition Blu-ray Disc edition costs $79.99 SRP.

With the release of Lost: The Complete Sixth and Final Season, audiences can relive every episode in the landmark final season, as the fate of each character and answers to long-pondered mysteries from the previous seasons, are revealed. In addition, the Blu-ray and DVD releases contain hours of never-before-seen bonus footage including deleted scenes; bloopers; an often emotional featurette where cast, crew, writers, producers and other Hollywood notables discuss ending the acclaimed series; a much-anticipated new chapter of the island's story from Executive Producers Damon Lindelof and Carlton Cuse; and much more.

Current reports seem to suggest that with Blu-ray editions, the extra disc is the same as the exclusive disc that comes with the DVD edition of the Lost: The Complete Collection (DVD)[2].

An error appeared on a number of units of the UK DVD box, saying that the set includes Season 6 deleted scenes, when in fact it does not. The deleted scenes were never intended to be on the DVD set. The scenes are, however, on the Region B Blu-ray Disc set. Subject to proof of purchase, UK Customers who purchased the UK DVD with the error can request the deleted scenes to be sent to them on an extra disc, free of charge, from the contact details below. This applies to UK customers only. In fact, Russian DVD box (Region 5) does not include deleted scenes as well. There is no information provided on possible Region C Blu-Ray set.