Lost: The Complete Fourth Season -- The Expanded Experience is the fourth box set compilation of Lost episodes, featuring all 14 hours of the show produced as part the fourth season, as well as a number of special features. It is due to be released on December 9, 2008. 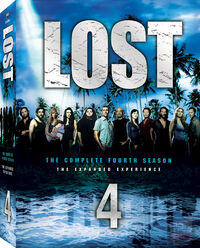 BURBANK, Calif., April 25, 2008 - From the halls of Seattle Grace Hospital to a mysterious South Sea island, life altering changes are everywhere in the latest seasons of two of television's top-rated dramas, available to own when Grey's Anatomy: The Complete Fourth Season - Expanded and Lost: The Complete Fourth Season - The Expanded Experience come to DVD and Blu-ray Disc from Walt Disney Studios Home Entertainment. Along with every intriguing episode from each show's dramatic fourth season, these multi-disc sets come packed with memorable bonus features that will take fans even deeper into these "must watch" shows. Each ABC series comes to DVD and Blu-ray Disc just in time for fans to catch up on their favorite episodes before the new season begins.

More than three months after their fateful crash, the survivors of Oceanic Flight 815 learn the only thing more dangerous than the Island might be the people who have come to save them from it. Every twist and turn, and all the secrets and clues of the boldest show on network television come together in one place, taking fans deeper than ever into the mysteries at its heart. Shocking revelations and subtle clues about The Oceanic 6, The Others, the Black Rock, the Dharma Initiative and much more make Season Four a must own DVD and Blu-ray for any fan.

Retrieved from "https://lostpedia.fandom.com/wiki/Lost:_The_Complete_Fourth_Season_(DVD)?oldid=435635"
Community content is available under CC BY-NC-ND unless otherwise noted.