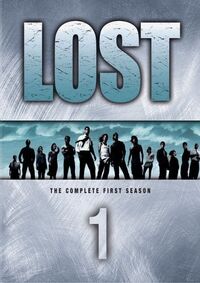 Season
Episodes
1
25
Discs
7
Extras
The Genesis of Lost
Designing a Disaster
Before They Were Lost
Audition Tapes
Welcome to Oahu: The Making of the Pilot
The Art of Matthew Fox
Lost@ComiCon
Lost: On Location
The Trouble with Boars
On Set with Jimmy Kimmel
Backstage with Drive Shaft
The Lost Flashbacks
Deleted scenes
Bloopers from the Set
Released
September 6th, 2005

Lost: The Complete First Season (known as The Complete First Series in Region 2 markets) box set is the first DVD compilation of Lost episodes. It features the 25 hours of show produced as part of Lost Season 1, as well as a number of other special features. The DVDs were released September 6, 2005 in the United States, November 30, 2005 in Australia, and January 16, 2006 in the United Kingdom. The Blu-ray Disc set was released on June 16, 2009 in the United States.

Tales from the Island

¹Not featured on R2 or R4 DVD. These features are available in R2 and R4 countries on the Blu-ray Disc set.

The Blu-ray Disc set of Season 1 includes features that were previously only found on the Best Buy Bonus DVD and the TV Guide Bonus Disc.

In specially marked sets, Best Buy included a bonus disc with extras not included on the regular season 1 DVD. It featured: