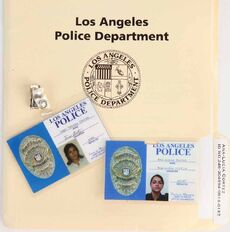 The Los Angeles Police Department (LAPD) is the police department of the City of Los Angeles, California. It is the third largest law enforcement agency in the United States, with over 9,000 officers and 3,000 civilian staff.

Retrieved from "https://lostpedia.fandom.com/wiki/Los_Angeles_Police_Department?oldid=1112694"
Community content is available under CC BY-NC-ND unless otherwise noted.