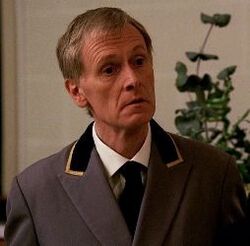 A London doorman opened the door to a building where Charles Widmore resided when Ben visited London after the rescue of the Oceanic 6. He was surprised when Ben claimed to be there to visit a Mr. and Mrs. Kendrick because it was so late at night. Ben offered to wait while the doorman called the room to verify his visit (though, unseen by the doorman, Ben was holding a telescopic baton to attack him in case he did call), but the doorman let him go with no further questions. ("The Shape of Things to Come")

Retrieved from "https://lostpedia.fandom.com/wiki/London_doorman?oldid=1082201"
Community content is available under CC BY-NC-ND unless otherwise noted.