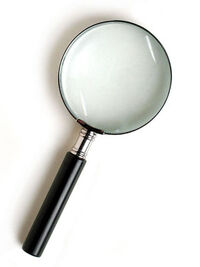 For the portal, See: Portal:Literary techniques

A literary technique, or literary device, is an identifiable rule or structure employed in writing which can be identified and used for literary analysis. These tools are used by the author "to enliven and provide voice to the writing".[1]

Coincidence is defined as "a sequence of events that although accidental seems to have been planned or arranged."

In literature and film, irony is defined as "a technique of indicating, as through character or plot development, an intention or attitude opposite to that which is actually or ostensibly stated".

In Lost, a number of points of cosmic irony occur, in which fate appears to be playing a cruel joke on some of the characters (some know it as "poetic justice").

In literature and film, juxtaposition is the arrangement of two opposing ideas, characters, objects, etc. side-by-side or in similar narratives for effect.

A cliffhanger ending is a plotting device in which a movie, novel, or other work of fiction contains an abrupt ending, often leaving the main characters in a precarious or difficult situation. This type of ending is used to ensure that, if a next installment is made, audiences will return to find out how the cliffhanger is resolved.

Many Lost episodes/seasons cut to commercial breaks, or end, on a cliffhanger.

A plot twist is a change in the expected development of a fictional work. In television, a plot twist could be considered a twist ending if it happens at the end of a scene, episode, season, or series. Plot twists are often foreshadowed by small clues.

An archetype is a method for the analysis or writing of stories and mythology. Archetypal analysis claims that all mythologies have the same basic structure with respect to their characters, and their storyline.

The storyline and all characters of Lost may be analyzed by these methods. The writers of Lost almost certainly are aware of archetypal analysis, as it is a common topic of study in learning the craft of writing.

A redshirt is a type of stock character in film or television that is a non-featured character, whose purpose to the plot, usually, is to be killed. The term does not refer to the actors, only to the characters. The actors that play "redshirt" characters are usually credited with the status of "guest actor".

An "unseen character" is a recurring stock character who is important to the plot, but usually not shown to the audience. Occasionally, they are shown in shadow or only from the neck down.

Jacob would be an example in Lost of an unseen character who has been shown in shadows.

A flashback is a story device where an interjected scene takes the narrative back in time from the current point the story has reached. Flashbacks are often used to recount events that happened prior to the story’s primary sequence of events or to fill in crucial backstory. The technique is used to create suspense in a story, or develop a character. In literature, internal analepsis is a flashback to an earlier point in the narrative; external analepsis is a flashback to before the narrative started.

Flashbacks are a major part of how Lost tells its story, and one of the major components that makes it such a unique and distinctive television program compared to other TV shows. Each main character has been featured in one or multiple flashbacks that portray what happened in their life before being stranded on the Island.

A flash-forward (or prolepsis, also sometimes known as a flash-ahead) in a narrative occurs when the primary sequence of events in a story is interrupted by the interjection of a scene representing an event expected, projected, or imagined to occur at a later time. The flash-forward technique is used less frequently than its reverse, the flashback.

In Lost, the flash-forward technique was introduced in "Through the Looking Glass, Part 1", although it wasn't made clear that it was a flash-forward until the end of the episode. The first episode to feature a flash-forward that was clearly shown to be one from the start was "The Beginning of the End". "Ji Yeon" was the first episode to intertwine flashbacks with flash-forward, although the flashback element was only clearly revealed to be in the past at the end of the episode, making its temporality a plot twist, albeit one that perhaps caused confusion among some viewers.

In Lost, the flash-sideways device was introduced in "LA X, Part 1". Throughout the episode, onscreen events would switch between those happening on the island in 2007 and those happening in an alternate reality on September 22, 2004, in which Oceanic Flight 815 didn't crash.

Foreshadowing is where a writer drops subtle hints about plot developments to come later in the story. Unlike a flash-forward, a foreshadowing only hints at a possible outcome of the story, without describing it explicitly. A hint designed to mislead the audience is referred to as a red herring.

In Lost this device is widely used, leading to a long list of unanswered questions.

A catch phrase (a memetic phrase) is a word, phrase or expression recognized by its repeated utterance. Some catch phrases become the de facto "trademark" of the character with whom they originated. Lost employs many regularly spoken phrases; a partial list can be found on the main article.

Symbolism is the applied use of symbols: iconic representations that carry particular conventional meanings.

Symbolism employed on Lost involves the use of items or pieces of dialogue which echo a character's state of mind, and even prolonged glances on the show can suggest thought processes and motivations. Note that symbolism is always subjective, and is naturally not the "right" interpretation. Nevertheless, clear symbolism should be seen as distinct from theories.

An unreliable narrator is a literary device in which the narrator of a story cannot be trusted. This type of narrator (or narrators) would typically make use of an ellipsis to omit key information in the narrative only to shock or amuse the audience later on with its unexpected revelation.

For example, in the short story "An Occurrence at Owl Creek Bridge", the narrator, someone removed from involvement in the plot, is relaying the story to the reader. In Act II, the narrator tells the reader Farquhar escaped his punishment and returned to his family. Act III, however, reveals the unreliable narrator when a plot twist ending shows the escape was a hallucination experienced in the last moments of Farquhar's life.

The Lost story itself is sometimes viewed as the unreliable narrator, utilizing various literary techniques in the plot to manipulate the audience.

An unseen character is a literary term for a certain type of stock character. An unseen character is often a recurring one, not shown to the audience, but may be shown in shadow, or only from the neck down. Their importance to the plot is usually key to their mystery, and on Lost there have been a number of instances of this device, including with Jacob and Ben's "man on the boat".

Retrieved from "https://lostpedia.fandom.com/wiki/Literary_techniques?oldid=865584"
Community content is available under CC BY-NC-ND unless otherwise noted.