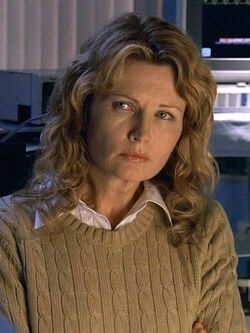 After Carole and Claire were in a car accident, resulting in Carole's coma, Lindsey visited Carole in the hospital. While Lindsey was visiting, Claire arrived, and the two briefly argued before the doctor arrived to inform them that Carole may never wake up. Later, Lindsey arrived at the hospital to find Claire and Christian Shephard already there. Lindsey argued with Christian about why he was there, and Christian revealed to Claire that he was her father. Christian later told Claire that Lindsey's hatred for Christian was one reason he stopped coming to Australia to visit Claire. ("Par Avion")

Years later, Christian showed up at Lindsey's home and drunkenly demanded to see his daughter. She refused, claiming he had no right to see her, and Christian implied that he paid the mortgage on her home. Ana Lucia Cortez came and took Christian away, and Lindsey shouted after him that he needed help. ("Two for the Road")

Retrieved from "https://lostpedia.fandom.com/wiki/Lindsey_Littleton?oldid=1072420"
Community content is available under CC BY-NC-ND unless otherwise noted.